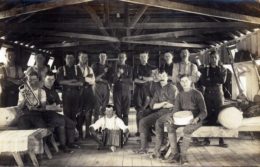 Over 60,000 men are estimated to have trained at the Featherston Military Training Camp.

In January 1916 New Zealand’s biggest army training camp opened on the main road between Featherston and Tauherenikau. It covered almost 30 hectares and was the biggest settlement in the Wairarapa at a time when Masterton’s population was 5,500.

When World War One began in, most hoped the war would not last long. By the end of 1915 it was clear that fighting would continue and more trained soldiers would be needed. Trentham Camp was overcrowded and a new site was chosen near Featherston.

The permanent accommodation of the camp was designed and built between August 1915 and January 1916 by 1000 men. 30 tonnes of nails were used on the 250 buildings. The camp was lit by electric generators and used the latest design for the 90 barrack buildings. Water was carried through 10 kms of steel pipes and there was 5 kms of roading.

A railway line was laid from Featherston so large quantities of supplies could be easily transported. A hospital, shops, chapels, the YMCA (Young Men’s Christian Association) and an officers’ club were also built, mostly along the main Featherston-Masterton road. Accommodation for the many horses needed by the army was near the Tauherenikau River.

There were several smaller camps attached to the main camp. Papawai Camp near Greytown was a training camp for shooting and for specialist groups such as signallers. Canvas Camp (a tent area) was set up on the south side of the road, and C.1 Camp at Tauherenikau was for men classed as unfit who received physical training to become fit enough for overseas service.

The camp could house about 8000 men at a time, at different stages of training. Soldiers who had almost completed training would move to Canvas Camp so they would be ‘toughened’ for real war. Each large group of men coming into the camp was called a ’reinforcement’. When each numbered reinforcement was trained, they marched over the Rimutaka Hill road to Trentham Camp before leaving on ships for Europe. Featherston people would offer tea and food to the soldiers at the summit.

The training period at Featherston was from two to four months. They learned to march, dig trenches, fire rifles, machine guns and artillery cannon, manage horses, obey orders quickly, and to live together in large groups. Most men trained as infantry (foot soldiers) but others trained as stretcher bearers, signallers, engineers, gunners, drivers, cooks and clerks. Featherston was the main New Zealand camp for artillery, mounted rifles and specialist troops.

Feeding such a large number of men was a big job. There were 16 dining halls and the men ate simple but wholesome food. Most soldiers gained weight because of regular food and exercise. A typical menu for the day was: Breakfast – Mince and potatoes, porridge, bread, butter and tea; Lunch – Bread, butter, jam, cheese and tea; Dinner – Roast beef, potatoes, suet pudding.

Soldiers were allowed out of camp and the camp shops provided extra services. Some prominent South Wairarapa people decided the soldiers should have a place to go away from the camp and they raised the money to build the Anzac Club (now Anzac Hall) in Featherston. This offered reading and writing rooms, a concert hall, billiard tables, card tables, baths and a cafeteria – a home away from the camp. Races at Tauherenikau Racecourse were very popular with the soldiers.

In the early 20th century most people belonged to a church so some of the main churches, including Anglican, Catholic and Salvation Army, set up chapels at the camp for the soldiers. There was also the YMCA soldiers’ club. Gardens and lawns were laid to make the camp more pleasant for the men.

When World War One ended in November 1918, the camp was still full of soldiers under training. The world-wide influenza pandemic arrived in New Zealand and was carried into Featherston Camp. Many soldiers became ill and before the pandemic was over, more than 160 had died. The Anzac Club and barracks became temporary hospitals for the sick soldiers as the proper hospital could not cope with the numbers.

After the war, the large camp was no longer needed. The buildings were often relocated and occasionally can still be seen around Wairarapa. Part of the soldiers’ club became the Kahutara Hall and was shifted in 1921.

A small camp was built in 1942 for Japanese prisoners of war, captured in the Pacific campaign. Concrete foundations of a few World War Two buildings can still be seen across the road from the memorial.