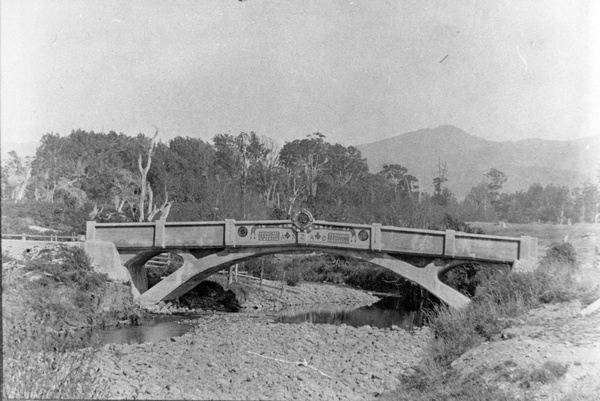 Kaiparoro’s unique monument to the fallen of World War One took the form of a concrete bridge.

The ANZAC Memorial bridge at Kaiparoro was designed by Alfred Falkner who first settled in Kaiparoro in 1889.

The main road north from Masterton had always gone through Mauriceville but in 1905 Joseph Dawson constructed a suspension bridge over the upper Ruamahanga River at the foot of Mount Bruce and the western route became the more favoured.

The Makakahi River was a problem for travellers at Kaiparoro though. Although not a difficult stream to ford in dry weather, when rain fell in the foothills of the Tararua Ranges, the river quickly filled and crossing the ford became dangerous.

It was clear that a bridge was needed at the Kaiparoro ford, but getting one built turned out to be a time-consuming affair. The Makakahi River at Kaiparoro was in the Mauriceville County, and although it was keen to see a bridge constructed, it had difficulty persuading the Government to help fund it.

Falkner commenced work on the bridge in June 1921, when a wooden framework was built. Falkner kept a photographic record of the construction and it is possible to see the bridge slowly taking shape in his photographs. The bridge was completed and ready for opening in December 1922. Alfred Falkner had not only built the bridge but, by using local labour, he had managed to build it for only £800.

A large crowd gathered at the bridge on 1 December 1922 to see it officially opened. Among those who spoke was MP George Sykes, who praised Falkner’s work and the support he had received from Miller. He also mentioned how pleased the Wairarapa Automobile Association was that their members could now motor over rather than through the Makakahi.

Falkner replied by saying that the success of the bridge was less dependent on the efforts of Councillor Miller and himself, and more the result of the “muscle available from the returned soldiers.”

The bridge was more than just a carriageway across the Makakahi – it was also a war memorial. The northern side of the bridge was ornamented with a plaster copy of the Memorial Plaque presented to next of kin of those who died in World War One. Falkner family members recall that Alfred Falkner made a plasticine model of the plaque from which he made a plaster of Paris mould. Plaques were cast from these moulds, although they were not completed by the time of the opening. A further ceremony was held on Anzac Day 1923 to dedicate the panels and the inscriptions. At the unveiling the Reverend Green pointed out how fitting it was that the memorial should be a bridge. “Those who had fought had constituted a human bridge over which we had passed to victory.”

Alfred Falkner died under sad circumstances in Jun 1939. The 84 year old settler had been missing from his home for some days and following an extensive search his body was found under a large rimu log where he had apparently sought shelter. His obituary mentioned his role as consulting engineer to the Mauriceville County and recorded his part in the construction of the “Bruce Memorial Bridge”, as well as others.

The bridge, the last one-way bridge on road between Masterton and Eketahuna, was replaced by a more modern structure in the mid-1950s. Although calls were made for its destruction, its role as a unique ANZAC memorial ensured its survival.