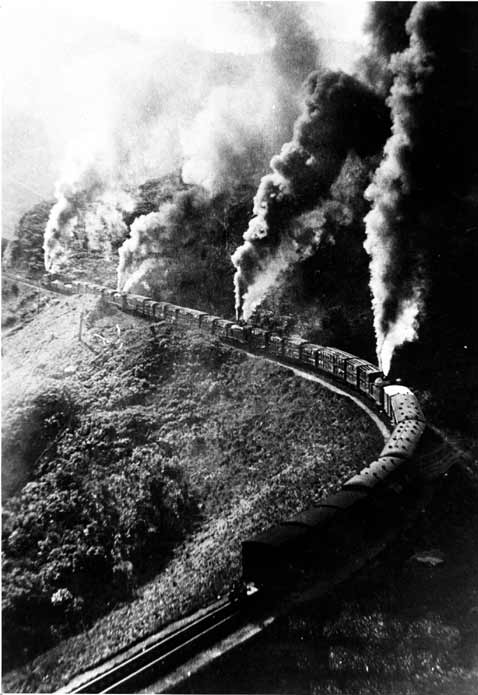 Four Fell engines are required to haul a heavily-laden train over the Rimutaka Range.

The Rimutaka Range presented a great challenge to engineers looking to construct a railway to Wairarapa in the 1870s.

Surveyor John Rochfort took a line as far north as Kaitoke, before moving up the Pakuratahi River valley. It was steep with many tight turns but it was nothing compared to the grade on the eastern side of the main range. From the summit to the Wairarapa base the gradient varied between 1 in 14 to 1 in 16, far too great for normal locomotives.

Many options were explored, including fixed engines and carriages on cables but it was decided to use the system recently used between Italy and France. Swedish engineers had devised an extra central rail, double-sided with the rails facing outwards and a special set of horizontal grip wheels added to the engine. An improved system, designed by John Fell, featuring an extra set of grip wheels and named after him, was patented in 1863, and used for the pass. It was this system that was used for the Rimutaka Incline.

An order was placed with the Avonside Engine Company, in Bristol, England four engines were built, each comprising about 8000 parts, and re-assembled in Wellington.

The first of the engines, known as ‘199’, was commissioned at the start of 1877 and immediately sent to help the construction of the Wairarapa line. Special braking vans were also made, each with four 450 mm cast iron brake blocks that were clamped to the central rail. At the end of each descent the blocks were changed.

The men working on the eastern face had to excavate three tunnels, the largest just below the summit where teams of men worked around the clock in eight-hour shifts. It was dangerous work and there were fatal accidents.

The line was finished in August 1878, with an official opening ceremony on 12 October, but the ceremony was an anticlimax and rather an omen for the future. Heavy rains in the hills caused slips, blocking the tracks. The first official train arrived two days after the ceremony, the halting journey having taken over five hours.

The line was always prone to the elements. The hillsides had been cleared of trees, and heavy rainfall carried debris and gravel across the lines. The wind was a problem too – crews would often have to clear fallen vegetation off the line.

Wind caused the worst accident, just over a year after the track opened at an embankment over a very exposed corner called ‘Siberia’. On 11 September 1880 a heavy gust plunged two carriages and a brake van over the bank, smashing the carriage and killing three young people, and injuring others, one of whom died three weeks later. A large solid windbreak was built to prevent a recurrence of the accident.

The Rimutaka Incline trip changed little over time. Trains were brought to each end of the Incline, and carriages attached to the Fell engines, each of which could only pull about twenty tonnes, so large trains required up to four engines. Each uphill trip took about one hour twenty minutes, with another fifteen minutes to reattach the wagons. The Fell engines were not turned around, all downhill running being undertaken cab first, to ensure sufficient water to cover the top of the fire box.

The engines and track were both expensive to maintain and the line was superseded by the long-awaited deviation and tunnel late 1955. The redundant Fell engines were removed to Silverstream from where they were demolished, except ‘199’ which was returned to Featherston where it forms the basis of a museum.