Early Flying in the Wairarapa 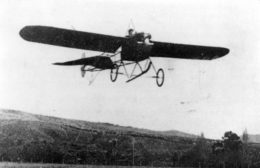 The Fisher monoplane flown by Reginald White, flying over the Hurunuiorangi Flats near Gladstone in 1913.

Flying came early to the Wairarapa. Just ten years after the Wright Brothers flew in 1903, flights took place near Featherston and at Gladstone.

Wellington engineer Percy Fisher designed and built a small monoplane in 1912 which he tested at Pigeon Bush. Although he made some short ‘hops’, it was too windy and he tried the flat farmland at Hurunui-o-rangi near Gladstone where, between June and August 1913, he made many short flights, the first by a New Zealand-built aircraft.

After World War One there was great interest in aviation, many record-breaking flights were made and pilots were treated as celebrities. The Wairarapa Aero Club, later changed to Wairarapa and Ruahine Aero Club, was formed in August 1929.

By February 1930, Martinborough had an airfield and a hangar. Flight Lieutenant Park was the first instructor, a De Havilland Moth, ZK-ABE was bought and six pupils began training. Jack Kingsnorth was the first to gain his license.

The Masterton airfield was on the South Road extension near the Waingawa River, where working bees cleared the stony land. On 14 March 1931 the first North Island Pageant was held, with 33 aircraft attending. At the show, Masterton’s airfield was named Hood Aerodrome after George Hood, a Masterton pilot who had died trying to fly the first Tasman Sea crossing in January 1928. A clubhouse was built, later burning down in 1949.

In September 1939, the Royal New Zealand Air Force (RNZAF) took all club aircraft for pilot training so the Wairarapa and Ruahine Aero Club stopped flying. In 1940, the RNZAF decided to use Hood Aerodrome and more land was bought by the government. In April 1942, 14 (Fighter) Squadron arrived in Masterton, with Harvard trainers and later with P-40 Kittyhawk fighters. Officers lived in a Masterton hotel while ground staff lived at a camp near the east end of Kuripuni Street. Blast pens, to protect the aircraft from attack, were constructed around the airfield and there were three runways. 14 Squadron left Masterton in 1943 to fight in the South Pacific.

Trials for aerial topdressing using RNZAF Avenger aircraft were held at Hood in 1949 and soon after Air Contracts, using Tiger Moths, began topdressing. Masterton became part of the new topdressing industry with several companies at Hood. Through the 1950s and 1960s, many different types of topdressing aircraft were seen at Hood Aerodrome – Cessnas, Fletchers, Pipers, Agricolas and Beavers. Trials with a large Bristol Freighter dropping up to 6 tonnes of fertilizer were held in 1954.

The Wairarapa and Ruahine Aero Club became more active and bought modern light craft. The club also had gliders from 1959 and Hood became an important base for gliding. The club used winch and aircraft launching and national gliding competitions saw many gliders circling Masterton.

In the 1960s, Hood Aerodrome became an airline destination when South Pacific Airlines of New Zealand (SPANZ) was formed. The airline flew DC-3 Viewmasters to smaller cities and towns from 1960 to 1966. It was difficult for a small airline to compete with New Zealand’s national airline NAC and since SPANZ several other airlines have tried to offer passenger services from Masterton without much success.

Over the years there have been many air pageants at Hood Aerodrome and an airshow in March 1954 was part of Masterton’s centennial celebrations.