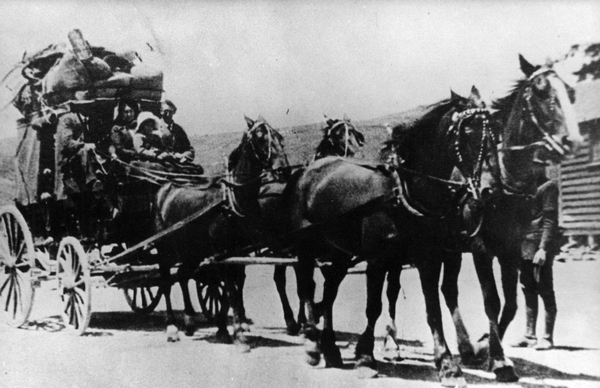 Bob Beattie driving the Castlepoint coach at the Blairlogie Hotel.

For Wairarapa’s first settlers, water was the main highway. Maori predominantly lived in coastal communities or on river and lake sides in the interior. People and goods were transported by waka, or on foot.

The first pakeha to see Wairarapa arrived in ships too. On Captain Cook’s arrival off the Wairarapa coast in early 1770 he was greeted by local Maori who paddled out to trade with him from Cape Palliser and Castlepoint.

For the first years of pakeha settlement of the district, the sea was the most important trade route. Coastal stations were used as staging points for produce from the interior farms, and bullock wagons loaded with wool were dragged to the ports. As the Wairarapa coast had no natural harbours capable of handling large ships, the cargo was loaded into small surf boats, or lighters, and rowed out to the sailing ships and steamers that anchored just off the shoreline. The surf boats returned laden with station supplies.

In some of the more important small ports, such as Castlepoint, small jetties were built and landing sheds were constructed to handle the goods, both inwards and outwards. The majority of wool was shipped from the eastern stations in this manner until well into the 20th century.

When the Ruamahanga valley was settled a land-based line of communication was needed, but the Rimutaka Range posed an obstacle for reasonably-priced transport.

The first road was formed in the early 1850s and goods were shifted over the track on pack bullocks. The first settlers for the newly-established townships of Greytown and Masterton recalled their journeys in 1854 on the backs of such animals.

The first wheeled traffic across the road was the bullock-drawn dray that Greytown settler Thomas Kempton drove in June 1856. He carried a tonne of goods. In the following month Charles White made his first journey with horse-drawn carts. His journey from Lower Hutt to Greytown took four days.

The road was narrow and dangerous, and few of the rivers were bridged. The first Waiohine bridge was opened in 1859 but the Tauherenikau was not spanned until 1872, the Waingawa a few years later.

From the 1860s to the early 1880s the passenger coach was the easiest way for passengers to get to Wellington. The horse-drawn coaches left Masterton early in the morning and arrived in Wellington in the late evening. Their way over the hill road was often impeded by large wagons taking timber from the many Wairarapa sawmills to market in Wellington.

That all changed in the late 1870s with the arrival of the railway.

The Rimutaka Range was a huge problem for the project engineers, a problem solved by using Fell engines for the steep gradient on the eastern side of the hill, known as the Rimutaka Incline. They were built with an extra set of wheels and brakes that gripped an added central rail.

The railway reached Masterton in 1880. It made the trip to Wellington a lot quicker – even though the Fell engines ascended the hill at walking pace – and it became a lot more economic to ship goods out of the district. The Rimutaka Incline remained the main method of transport until replaced by a tunnel in the 1950s.

Motor cars and motor bikes first appeared in Masterton in the early years of the 20th century but remained uncommon for a long time. Most roads were still unsealed and a trip of any distance was an adventure, with unreliable cars breaking down frequently, and tyres proving prone to punctures.

It was not until the 1920s that buses and motorised trucks became popular. New Zealand’s first double-decker sheep truck was made in Wairarapa at that time.