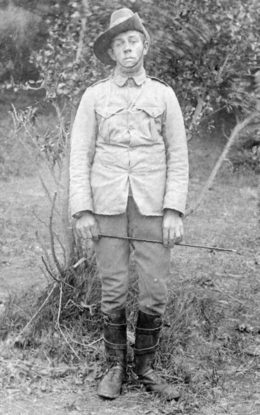 John Duckett was a Wairarapa farm boy who served in the South African War.

Among the soldiers who left Wairarapa to fight in South Africa were many farm–born and raised young men. John Duckett junior, born in 1882 at his parents’ Mikimiki farm, was one such young man.

He was selected for the Seventh New Zealand Contingent, described as a splendid shot and an excellent horseman. His popularity led his fellow residents of the Mikimiki area to present him with a pair of fieldglasses and an illuminated address

Duckett kept a small diary, listing that he was glad to sail for South Africa in early April 1901. The Seventh arrived at Port Natal on the 9th May, and were sent by train to the supply camp at Standerton. Here they received their supplies and their horses but they did not see any action until the end of May when he recorded that on 31 May they chased ‘jackeys’ which they did not catch, but that on 1 June the ‘Jacks’ chased them, killing three men and capturing 13.

The troop was sent to Springs, near Johannesburg, where they were under heavy artillery fire and assigned to Lt Col Garrett’s command, trying to stop the commando leader Smuts leaving Western Transvaal. They made contact with Smuts, and chased him up and down the Vaal River, but only captured some supply wagons and animals.

From August 1901 the New Zealanders used the Boer tactic of night raiding, although Duckett was still recording his disappointment that contact with the Boer was minimal. As the month progresses, however, the contact was made on a more regular basis – not always with a good result though.

23rd August: Night march – got 25 prisoners and 20 wagons. Got my horse hit. Sgt Maj Jocket captured. Main body got a fright. Lt Nelson and Sgt. Maj. Hone killed and two other lieutenants and one man hit. Jocket had his arm off.

In September the New Zealanders were sent to Newcastle, then to the Vryheid hills to assist in the attempted capture of the Boer leader Botha. On 6th October they encountered Botha’s main force, and Duckett recorded that a major fight had taken place, which the British troops had lost.

On 9th October Duckett recorded that his troop was near Kitchener’s main camp, and from that date the fighting changed to real guerilla war – living in the saddle and fighting during the night. Duckett’s diary records many days of short rations, nights of raids for food.

Life on the veldt was hard for the troops. The day temperatures were agonisingly hot, while at night the thermometer dropped below freezing. In later life Duckett said a trooper’s most valued possessions was his saddle, his horse and his pistol – the saddle to sleep in, the horse to run with and the pistol to use when in a tight spot.

In the first months of 1902 the Seventh Contingent pushed into Frankfort in the Orange Free State, winning a number of fights and capturing a lot of equipment. As March and April unfolded, and the Seventh neared the end of their tour of duty, their contact with the Boer lessened, and Duckett recorded that he felt the Boer forces were on the retreat.

The contingent left South Africa on 21st May. They were disbanded in New Zealand on 30 Jun, 1902.

John Duckett junior returned to Wairarapa, where he and his brother Herbert bought a farm at Opaki. He married Teresa Agnes Mathie at Kopuaranga in 1904, and then moved to Dunedin where he worked in the railways. His city stint was not to last long, and John and Teresa Duckett soon returned to Wairarapa managing ‘Kilmore’ at Alfredton. Following a brief spell at Whareama, the family moved to the Rangitumau district in the early 1920s. John Duckett managed the Pike Brothers farm for nearly twenty-five years. He served on the school committee, including a spell as chairman, and was active in shooting clubs. He died in 1953.