From Wairarapa to South Africa 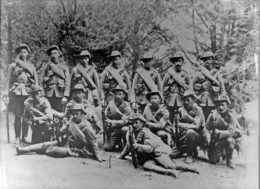 Masterton members of the 4th Contingent to the South African War

When the First Contingent of New Zealand soldiers to serve overseas embarked for the trip to South Africa, Wellington was decked out for a parade, and the town was crowded with visitors from all over the colony, including many from Wairarapa.

The cause of the war was grounded in the discovery of gold in southern Transvaal in 1884 which led to the large-scale migration of British miners into a region of the Transvaal controlled by farmers of Dutch descent, known as Boers. The Boer farmers resented the newcomers, whom they called ‘Uitlanders’ or foreigners, and denied them voting rights.

On 9 October 1899 the President of the South African Republic, Paul Kruger, issued an ultimatum to the British Government, saying that if British troops, rumoured to be about 50,000, were not withdrawn from their border, war would be declared. The ultimatum was ignored, and the South African Republic, along with the Orange Free State, declared war on 12 October 1899.

The New Zealand Government had anticipated the war, and a fortnight before it was declared announced the Government had offered Britain a contingent of mounted rifles, and the British Government had accepted the offer. By 9 October, before Kruger’s ultimatum, the troops had started to arrive for a camp at Karori, prior to sailing on the ‘Waiwera.’

New Zealand had a volunteer militia movement, where young men trained as soldiers to form the basis of a territorial army. For the South African campaign priority was given to those who had proven they were competent volunteers, and to those who were skilled horsemen, as most of the fighting was to be carried out by mounted riflemen.

By early October 1899 men and horses were steadily filling up the campsite at Karori. The declaration of war was greeted with great excitement in the camp. The volunteers gathered in the mess tent and sang the night away, with rousing renditions of ‘God Save the Queen,’ ‘Rule Britannia,’ and other patriotic favourites.

The community became involved as well. In Wairarapa, patriotic concerts raised funds for the troops, and two local chiefs, Taiawhio Te Tau and Tamahau Mahupuku offered two horses each for the contingent. The local newspapers got in behind the war effort too. In one article the Boers were described as ‘white savages,’ and as the ‘wildest and most vindictive of men’, their wives being described as ‘uncivilised to a degree.’

Special trains were run so Wairarapa citizens could see the troops off. At least two ex-Mastertonians, Charlie Hanson and Andrew Bowie, were among those serving in the contingent, and a special hymn composed by Masterton Anglican priest, Rev. Wyndham Earee, was to be performed at a special concert for the troopers.

On Friday the 20th the horses were loaded onto the ‘Waiwera.’ In all over 250 horses were ridden down from the camp, and loaded. Tamahau Mahupuku was one of those on the wharf, elegantly dressed in a tall hat and frock coat. His horses had been declined –they were more suitable for pulling a light carriage than charging across the South African countryside. His offer to raise a Maori troop was also declined. The British Government was not all keen on having ‘native’ troops involved in fighting white men, even Boers.

Saturday 21 October 1899 witnessed the greatest gathering yet seen in the colony, with over forty thousand assembled to send the troops off. The reception was a grand affair. The Governor spoke, stressing the importance of their mission. Appropriately patriotic songs were sung, army signalmen flashed patriotic quotations from street to street, and bands played suitable music.

At the reception’s end the men marched down to the ‘Waiwera’. Military decorum was forgotten as the members of the vast crowd rushed forward to shake the hands of relations and friends. Steamers crammed with spectators stood out in the stream and greeted the ‘Waiwera’ as she steamed past. At the heads the ‘Waiwera’ stopped and volleys were fired from the forts, and from D battery.

The local newspaper was sure the war would be swift and that there was only one possible outcome. They reported that the British Army was ‘too high class’ for the Boers, and that defeat was to be their bitter portion.