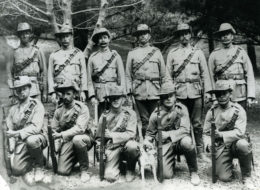 When the New Zealand troops left for South Africa in October 1899 there was no contingent from Wairarapa, although there were some soldiers with local connections.

In late December 1899 registrations of interest from prospective members were called for and many local men enrolled for the chance to go overseas –over 100 registered in Masterton and a slightly smaller number in Greytown.

The riding and shooting tests for the prospective members of the contingent were held at Moroa, near Greytown, and Opaki, near Masterton. In all 140 men were trying out for the 20 places available.

In the end ten Masterton men were selected and nine from the Greytown area. They left Wairarapa on 5 March, following a night of civic celebration.

The following morning the crowds reassembled at an early hour to escort the troops up to the railway station where over 1000 people assembled. At Greytown Railway Station 500 well-wishers gathered.

Harry York’s adventures started when the troops went into a training camp in Wellington. The men shipped out for Port Chalmers on 10 March where they drilled for two weeks then were loaded onto the overcrowded Gymeric and they sailed for Lyttelton.

It was not a healthy ship. The men were prone to violent attacks of vomiting and diarrhoea and the horses were also badly affected. Harry York’s first letters, written from the ship and from Albany, Australia, talk about the difficulty he was having in adjusting to ship life, and to the number of horses that were being lost in the poor conditions.

Harry took part in exercises in Beira, Portuguese East Africa but he was not impressed with his rations. Although stating he was well fed, and gaining weight, he also said the rations included biscuits which would ‘act well as concrete for a good path.’

In August he wrote home to say that he had been in his first action, and that, Septimus McDougall of Martinborough had been killed storming a hill held by the Boers.

In the middle of all his fighting he seems to have somehow remained the naïve country boy from Papawai. On 2 November he sent his sisters a letter, enclosing pressed samples of the wildflowers he had seen in the fields near Malmani, just north of Mafeking. He explained that the spring fields were full of ‘young grass and oceans of wild flowers,’ and that there must have been a thousand different kinds of bird.

His next letter came a month later, from Kimberley on 8 November. He apologised for not writing earlier, saying he had been in hospital again, after a relapse of enteric fever.

This letter, which was to be his last, spoke a little of a campaign he had taken part in saying, ‘we had a great go at the Boers. We had altogether about 40 big guns, maxims and rifle fire onto them & if you could have heard the noise off all those guns it would really deafen, although it was grand to be in it.’

As a farmer he didn’t like crops being destroyed, however, and he wrote of how wheat and oats crops, and potato crops, were destroyed by having troops ride through them, laying them flat to the ground. His letter closed with questions about the family and the farm at Papawai.

On 5 December the family received a telegram from Prime Minister Seddon saying their son had died from enteric fever. A newspaper reported that he had been given the chance to return to New Zealand but had opted to stay with his comrades. They said: ‘He was a very nice young fellow.’