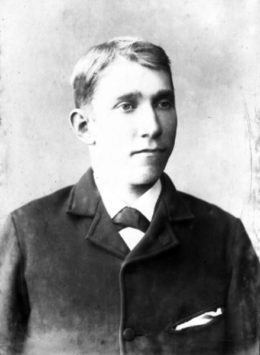 Carl Engsrom, a Swedish-born farmer from Makuri, went to South Africa in 1901.

During the Boer War all sorts of New Zealand men enrolled. Some were caught up in the wave of patriotic fever that swept through the country, while others looked upon it as a chance to take part in a foreign adventure.

Among those who enrolled to serve in 1901 was a Makairo farmer, Carl Gothrick Engstrom, born in Batterum, Sweden, in 1867, one of eight children. In 1884 he made his way to New Zealand as a sailor on the ‘Helen Denny.’ Finding the country to his liking he jumped ship in Wellington in late December and found work farming.

Engstrom took up a bush block near Pahiatua in the early 1890s and become naturalised in April 1899. At the time he was described as being steady, sober and industrious. His sponsor said: ‘He will make a good British subject.’

He joined the Pahiatua Mounted Rifles in early 1900 and he was selected for the 6th New Zealand Contingent. He was sworn in early January 1901 and left with the rest of the contingent in late January, keeping a diary of his adventure.

On arrival in East London in mid-March the 6th Contingent joined a large force that Kitchener was assembling to attack Pietersberg in north Transvaal. Bad luck dogged Engstrom – his horse died and he lost his replacement horse, and was forced to join the footsloggers. He did not feel in any danger until late August, when his patrol of 50 men came across 200 Boers and he was under fire for the first time.

The leadership of those in charge of the troops did not always impress Engstrom. On 3 January 1902 the officer in charge of A Squadron was described as ‘the most thick-headed fool that New Zealand could produce’; however his views were biased.

He was part of a group that became isolated from the main body and were forced to retire. They could see the main body but instead of coming to their aid it withdrew. The retreating platoon was forced to make its way through a swamp, where Engstrom’s horse got bogged and he was forced to surrender.

The Boers took his weapon, and stripped him. After being taken before the commander, Engstrom was set free. He had to walk naked for three miles, where he was able to obtain some boots, but no clothes. He finally caught up with the main body late at night, but still had to spend the night with only a blanket for comfort.

Fortunately things looked up and he soon recorded that he had spent his best day in South Africa. The cause of his pleasure was a sports day, held in mid January which lasted all day. Engstrom wrote that some of his friends won the ‘wrestling on mules’ competition.

He was still without a mount and was sent to Newcastle to find another horse. He was not impressed by the selection but was delighted to choose the horse he thought was the best.

The 6th contingent continued to serve in South Africa until it left from Durban in early April 1902. Engstrom did not leave with them however. In late March he joined an Imperial Division. By June his Swedish mother was very worried and his sister wrote to the New Zealand Government to determine whether he was still alive.

Engstrom did survive his period of service, returned to New Zealand nearly a year after the war ended.

Engstrom did not return to a happy live.

His farm at Makairo was sold in a mortgagee sale while he was away but he was soon farming again at Coonoor. He married the local schoolteacher, Ellen Welsby but once again lost his farm and moved to Rangitumau. He and his wife led a semi–nomadic lifestyle for a period, as she taught in country schools, and he travelled looking for farm work.

They moved into Masterton where Engstrom remained until he died in 1929, survived by his widow and his four children.