Masterton was devoid of the roar of skating wheels from 1911 until the beginning of the 1913 season. Mrs I. Cooper opened a rink in Perry’s buildings on Perry Street, which was until then known as J. J. MacLean and Co’s auction rooms. The new location was open every afternoon and evening, and all reports point to the facility being very well used, even with the minimal advertising seen in local papers. A fancy-dress carnival was booked in as the first event for the Perry Street rink, and many prizes were up for grabs for both costumes and abilities. A six-member band was engaged for the evening, and preparations were made for the decorating of the room. The night was an unequivocal success, with participants coming from all over Wairarapa.

Due to the popularity of the carnival, various weekly competitions were arranged to encourage participation, the first of which was a “potato race” where the winner received a silver cigarette case. The second competition was an egg and spoon race for women, followed by a hoop race for men, and the regular Thursday or Friday became known as “competition night.” Instead of a flood of advertising as previous rinks had done, Mrs Cooper stuck to an efficient weekly ad to remind patrons of the hours of operation, and the days on which the brass band attended. The final night was promoted with a minimum of fuss, and the season ended with a “good attendance of devotees.” 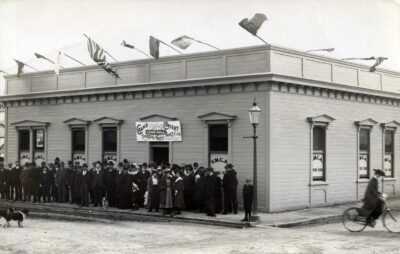 People lined up for a Grand Concert at YMCA Masterton, circa 1908. Photo: Wairarapa Archive

In April 1914, Mrs Cooper was back, but this time she leased the YMCA Gymnasium Hall in Church Street, which was converted into a skating rink with excellent lighting. The rink was open again for two sessions a day, with “first class skates” provided for hire. It was short lived, however, as by the end of the month there was the lease of an entire skating rink and associated equipment advertised in the Wairarapa Age.

Mr W. Dowling was the purchaser of the Cooper rink lease, with what appears to be a seamless transition. The hours and band evenings continued, as well as the occasional competition. He lowered the price of a double ticket, likely in an effort to boost numbers amid the rising threat of the commencement of a World War. Professional skaters Mr E. Gordon and Miss L. Wright were brought in for a brief period to provide private tuition in both plain and fancy skating, and they also provided an exhibition of both fancy and trick skating one Friday night to rave reviews.

A “monster fancy dress carnival” was announced for later in April, with a wide range of competitions and games on offer. Possibly due in part to the commencement of World War One, only the standard advertisements were to be found for the remainder of the 1914 skating season. Many of the local young men volunteered for military service, and left town for the training camps prior to their departure from New Zealand.

Midway through what would have been the 1915 season, and exactly a year into the war, a new rink was opened in the old gymnasium hall on Dixon Street by Mr Dowling, where the Elite Skating Rink had been in 1908. It was promoted as a healthy pastime and its popularity was assured. The floor had been prepared to the highest standard and was ready for patrons. One night in mid-August, 30 couples were skating on the floor at once, proving that the sport was definitely still in vogue. Beginner classes were advertised, as well as evenings which included music from a local band. Not long after, another skating carnival was advertised, but this time the name of “Glideaway Rink” was used in its promotion. These announcements lacked the enthusiasm seen in previous incarnations of skating carnivals, but the reviews appear just as glowing as earlier events.

It appears as if Mr Dowling lived by the mantra of ‘less is more’ as advertisements for the Glideaway Rink were few, especially for the remainder of the 1915 season.