Any fears that the inclusion of a second skating rink would lessen the numbers present at either business were quickly put to rest, as both rinks were dealing with record numbers crowding their venues. Even on the same night as a sell-out carnival held by Elite Rink, Winslow Skating Rink issued every pair of skates they had available, on top of any skates that regular enthusiasts supplied themselves. The competition for more patrons was fierce, however, as both rinks advertised competitions in which they would award a brand-new pair of Winslow skates to the winners. The Elite Skating Rink was posting numbers of over 160 patrons at a time and often had to order new skates to cater for the growing crowds. 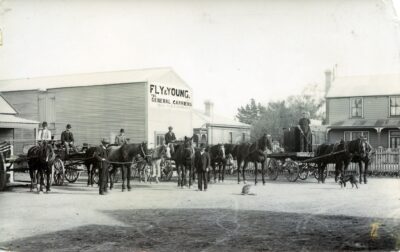 At the end of July 1908, the Elite Skating Rink announced they would be moving from above Wellington-Wairarapa Motor Cycle Company, to the old gymnasium in Dixon Street next to Fly and Young Carriers. They assured their patrons that the floor had been adapted specially for roller skating, and the building was to be extended by another 20 feet to cater for the increasing demands on the space.

Not to be outdone, the Winslow Skating Rink announced a sixty-foot extension to their building, making the total skating area 130 feet long which was to begin immediately. Flooring similar to those found in large city rinks was also promised to be laid, in order to make the establishment the most up-to-date rink around. While Winslow is out of action, Elite capitalised on the opportunity, and announced themselves as the place to be after 171 skaters were on the floor in one night. The private club which had reserved the floor for Wednesday nights rescinded their booking in order to allow the public another opportunity to practice their skills.

Winslow reopened with its much larger floor space, but without fanfare. They advertise as being “well patronised”, while Elite advertised alongside them with much more enthusiasm and promised even more new skates on order. They also took the opportunity to advertise themselves at the “largest rink in Wairarapa” with the “largest and best floor”, making use of the South Band and offering several free hire sessions for ladies and children. A fancy-dress carnival was advertised and promised to be unlike any seen before. Winslow was still advertising, and extended their hours to three sessions a day, every day, with all day sessions having free skate hire. Elite at this time, emphasised that they only provide new Winslow skates for hire, which insinuates that the actual namesake rink may be attempting to pass off lesser quality roller skates.

While Elite was frantically advertising their activities, great attendance and regular band, Winslow stayed relatively quiet. This could be due to them slowly fading into the background, or it is also very possible that they were doing so incredibly well that they had no need for newspaper advertising. Once the end of September neared, Elite decided to offer free skate hire to all in order to lure beginners into the leisure activity. Due to popular demand, Elite extended its season into the start of November, and decided to end with a bang – another grand carnival with free skates for competitors and the highly discounted price of only 1 penny admission.

Seemingly out of the blue, the proprietor of the Elite, R. E. Howell, filed for bankruptcy at the end of November. The business was in and out of the courts, with Howell’s wife suing a local dentist and then him then countersuing. Nothing else was heard in the off-season, but in early March of 1909 the Elite advertised their season opening to be on the 31st, which was to be under the old management.