The year was 1876. Queen Victoria was on the throne, New Zealand women were 17 years away from gaining the vote, and Masterton opened its first skating rink in the newly refurbished Railway Hotel in Queen Street.

Wairarapa was wrapped up in skating fever from November, after watching the new fad spread across the globe. In less than a month, Wairarapa had opened four skating rinks, established universal charges (including the option of private rink hireage), and begun to organise a large-scale inter-town competition. During this time, the popularity of the sport was ever increasing, with many regular skaters sharpening their skills over the plentiful opening hours.

Roller skating at the time was primarily a winter engagement, and one enjoyed within the confines of a large room such as a local hall, with seating provided for spectators. Music and lighting were not provided in earlier incarnations but began to appear once the sport had taken more of a hold.

Professionalisation of the sport overseas saw travelling shows provide opportunities for townspeople to see spectacular displays of feats and tricks performed by experts.

Skating and associated rinks fell by the wayside until 1884, when amid a nationwide depression, the sport started up again through Charles Renzie’s rink, located at the Theatre Royal in Queen Street. One Wellington journalist pointed out “how astonishing it is to find that so many hundreds of our half-starved community are [frequenting the rinks].” 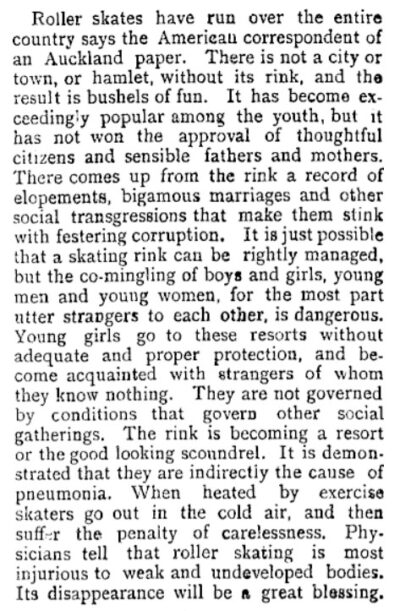 Opposition to skating and the rinks was somewhat common, and an opinion piece that was printed in the Wairarapa Standard seemed to push the idea of a rink being a sinful place, and that the act of skating could be harmful to one’s health. “There comes up from the rink a record of elopements, bigamous marriages and other social transgressions that make them stink with festering corruption.”

The next year of significant popularity in the Masterton skating world was 1888. The Theatre Royal again opened in April for the upcoming winter season, with a new supply of brass roller skates in hand, which were often hired completely out. Ladies-only sessions were provided for women to perfect their abilities without the watchful gaze of men. During this period, the only time music was supplied was when a band was hired to perform, attempting to be heard over the roaring of skates on wooden floorboards.

“There is not much difference between drinking and rinking. In the one case you lose control of your head and in the other of your feet, and the result as regards a downfall is the same in either.”

After the initial explosion of interest at the start of the 1888 season, the local skating rink grew more popular than ever. The Theatre Royal was now used six days a week for the sport, and to prevent overcrowding in the space, spectators were charged an entry fee and children were no longer admitted unaccompanied.

The local papers began to advertise another opening – that of the Elite Skating Rink – which would be in the Drill Hall [later the Gaiety Theatre] on Lincoln Road. Local councillors and officers were invited, along with many other dignitaries. The event was to be so popular that applications for reserving skates were invited.

The Theatre Royal took offence to this and advertised a “grand bon bon party” and the promise of something new and exciting.

Both rinks were now competing for customers, and they were found to be advertising directly after each other in the same column of the Wairarapa Daily Times.