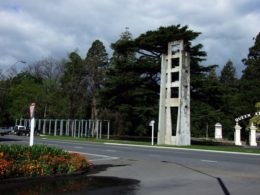 The bells from the Masterton Post Office clock hang in the Park bell tower for 30 years.

Masterton once had a majestic clock and bell tower, part of the Post Office and sited in the centre of town. When the Post Office was built the Government included a substantial clock tower but refused to fund the timing mechanism. It took a few years but locals raised the money needed for a four-faced clock and a set of four bells, all imported from Britain.

The clock and bells served the town well until the 1942 earthquake severely damaged the clock tower, necessitating its removal. The Post Office was also demolished shortly afterwards, replaced by a more modern building with no room for a town clock.

There the matter rested until the 1970s, when Masterton Rotary sought to have the bells re-erected, this time in a substantial purpose-built tower just alongside the main gates at Queen Elizabeth Park. A 12 metre tower of modernist design was built just north of the Pownall Gates, and the four large bells carefully installed.

Not everyone was in favour of the bells, arguing they would disrupt the nearby courthouse, stadium and Arts Centre. The bells first rang at Christmas 1978, but the critics were proved correct and the council decided to turn the bells off from 8 am- 5 pm.

When Masterton’s Queen Street returned to two-way traffic, the clock that had been controlling the bells was removed and the bells were silenced. The tower was made redundant and removed in 2008. The bells and the clock are in storage again, awaiting another reincarnation.