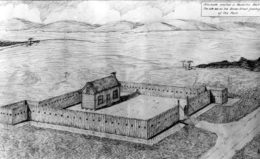 The Masterton stockade as recalled by historian Charles Bannister in the 1930s. The stockade was built in 1868.

Wairarapa was the only district on the North Island where was no bloodshed between Maori and pakeha, but the events of 1868 nearly changed that.

The Government had two insurrections on its hands, one on the East Coast where Te Kooti fought a series of well-publicised battles, and the other on the West Coast where Hauhau forces fought under Titokowaru. He had renounced Christianity, and led a strong group against settlers in southern Taranaki. He intended to drive pakeha from the land and restore Maori mana.

In the Wairarapa the two main leaders of the King movement, Ngairo Rakaihikuroa and Wi Waaka, had sworn allegiance to the Queen, but there were others who were interested in Titokowaru’s war.

As local tensions rose, the leader of the Wairarapa militia, Major Valentine Smith, sought a military solution to the problem, suggesting the Government should employ a 25-30 man militia and erect a stockade in Masterton but he was not widely supported. Greytown’s Wairarapa Mercury thought a stockade more likely to produce war than peace and many settlers agreed, thinking stockades would only incite Maori.

However, tensions between the races were rising and Major Smith’s campaign to have a stockade in Masterton was realised. In late November 1868 he forwarded a plan and the Government said he should go ahead. Smith had already chosen a site on part of what was to become Masterton Park and once the tender of Captain Boys of the Greytown Cavalry for £1190 was accepted, work started in December 1868.

It was built as a large square with two rooms at diagonally opposite corners. These rooms, or bastions, were roofed and shingled, and featured loopholes so defenders could fire along all four walls. The stockade’s walls were each double skinned, about 600 mm apart, the gap filled with gravel to act as protection. A moat, 2.5 metres wide and deep, surrounded the walls. On the Dixon Street side of the stockade a drawbridge was constructed, operated by a block and tackle.

By early 1869 men were employed removing the gravel from the moat, and the posts were in the ground for the walls. By February the building was nearly complete – the outer wall was clad and the inner wall was nearly finished off.

However, before work went much further, part of the moat collapsed. The Government sent C.E. Haughton, Acting Under-Secretary for Defence, to inspect the damage. He reported the stockade was mainly built to the plan submitted by Smith, but pointed out the plan was very loosely drawn. According to his report the stockade was especially vulnerable on the south-west and he said it would “certainly not stand forty-eight hours wind and rain from that quarter.” He also said the stockade was “practically useless and will in a short time cease to exist except in the form of sawn and split timber.”

The stockade, “a laughing stock to everyone, European and natives,” was handed over to the Government in late March, and six members of the Armed Constabulary took up residence in one of the bastions.

The threat of uprising quickly faded away, and the stockade was never required militarily.

In 1871, 1873 and 1875 it was used for the first Wairarapa Pastoral shows, and the bastions were later used as immigration cottages, with a two-storied cottage added to serve as a Mess Room and Kitchen.

In 1875 the stockade land was handed over to the Masterton Park Trust, which leased the stockade to R.I.S. Carver, a local musician, for £15 a year.

The stockade stayed on site until 1882, when the Park Trust sold it at auction.