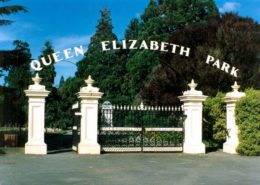 The main entrance to Queen Elizabeth Park is marked by a handsome set of gates commemorating the work of Charles Pownall, Mayor of Masterton.

Pownall had been mayor for over eight years in 1902, his terms (he alternated with George Heron) being marked by progress in developing the town. A public meeting in April 1902 discussed a fitting method of marking his retirement. He had successfully overseen the introduction of the drainage scheme and the high pressure water supply, as well as guiding the borough to accept responsibility for what was then called Masterton Park.

Some of those attending the meeting wished to present Pownall with a suitably inscribed plate, but the ex-mayor made it clear he would prefer his memorial should be of a public nature. Those at the meeting came to the view decorative gates at the south-western entrance to the park would be a suitable memorial.

As usual a committee was formed – the Pownall Memorial Committee – and they decided on ornate iron gates. They wrote to Wellington foundry Luke and Sons for a pattern, selected a design and, aside from a slight disagreement about the size of the gateposts, the work proceeded smoothly, being completed about the same time as the band rotunda.

A combined official opening for the rotunda and the gates was held on June 3 1903. A large party of dignitaries gathered to dedicate the gates. Mayor James Coradine said the citizens had gathered on many previous occasions but this was undoubtedly one of the most auspicious because the gates were dedicated to a gentleman who had done tremendous good for the town. He commented on Pownall’s absence from the ceremony, saying it was no doubt a reflection of his modesty. The mayoress unlocked the gates which were declared officially open amid enthusiastic cheering.

AW Hogg spoke next, also paying tribute to Pownall, and mentioning two other previous mayors – Caselberg and Renall – both also progressive. He said the people of Masterton should be proud of their park, and the council deserved every credit for the excellent condition it now displayed.

The visit of Queen Elizabeth and Prince Philip in early 1954 led to a name change for the park. The royal party drove through town to the park, where special floral displays in red, white and blue had been planted. The huge crowd roared its approval as the Queen was greeted at the band rotunda by the official party led by Mayor Ted Coddington. ‘Flags were waved and there were unprecedented scenes of enthusiasm.’

When councillor Len Frances wanted to mark the occasion by renaming Masterton Park in the Queen’s honour, suggesting it be called Queen Elizabeth Park, some thought the name too cumbersome and ‘Queen’s Park’ was chosen instead. However, the subject was raised again, this time the name ‘Queen Elizabeth II Park’ was put forward. Again, this name was considered to be too unwieldy and “Queen Elizabeth Park” was finally settled on.