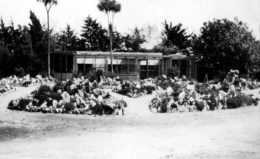 The Masterton Beautifying Society was established in 1923, and although interested in other projects in the town, played a major role in the development of the park. One of their first projects was the planting of a range of native trees in the park, trees the Society had harvested from the forests around the town. They also constructed a rockery.

The first major effort was in the construction of a fernery, totally funded by the Society and placed alongside the oval. The fernery was opened in August 1924, and well stocked with mainly native ferns.

The Masterton Beautifying Society then turned it sights to a rose garden and within a year had raised funds for the project, drawn up plans, purchased roses and planted the garden out in its formal manner. It was handed over to the council in November 1926.

The Society’s next major planting involved a rhododendron collection, planted along the southern boundary of the park, and featuring deciduous azaleas and modern hybrid rhododendrons. It was planted in 1928.

One of the Society’s prominent members, nurseryman Laurie Robinson, was to raise one of the world’s most popular garden shrubs from seed he d=gathered in the park. His son Paul harvested seed from a Photinia serrulata and when the seed germinated just one plant grew with extremely bright red new foliage. Obviously a hybrid with P. glabra ‘Rubens’, it was propagated and released under the name of ‘Red Robin’ and is grown right around the temperate world.