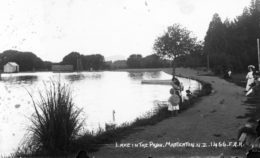 The Masterton Park lake was officially opened in 1908

Shortly after the Masterton Borough Council assumed control of Masterton Park, another 10 acres were added to the northern boundary. Mastertonians had long craved a substantial lake and say this ground, and its proximity to the Waipoua River, as a chance to provide a facility for swimming and boating.

In March 1906 the engineer prepared plans and estimates, including costs for protecting the new “ornamental waters” from the flood—prone Waipoua. When the tenders came in too high the engineer was allowed to employ day labour to finish the task.

Not everyone thought a lake was feasible. The ground was very stony and there were doubts that it would hold the water, and it seemed the sceptics were right, because once formed the lake took a long time to fill. The Waipoua came to its aid – a bad flood soon after construction left a deep layer of clay-like silt on the bottom, making it watertight.

The lake was a popular swimming spot, with bathers required to be clothed from neck to knee. A diving board was erected at the eastern end of the lake and swimming sports and aquatic carnivals were a frequent feature.

Following World War Two the lake was expended as part of the district’s war memorial, and renamed the Lake of Remembrance. An avenue of memorial oaks was added.

In the 1950s the lake was a popular spot with motor boats and water skiers, but the boats were damaging the edges of the lake and were eventually prohibited.

For many years a variety of paddle-powered leisure boats have plied the lake, accompanied by the many water fowl who call the lake home – especially during the duck shooting season.