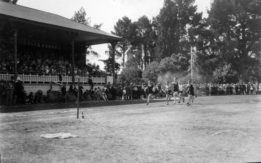 Masterton Park, established in 1878 was seen as the logical place for local sporting events. A large space in the centre of the reserve was left unplanted to act as the town’s main sporting ground and gathering place.

The Masterton Park Trust formed to develop and administer the park, always found itself short of money to expand the facilities. In 1891 local businessman Zepheniah Hoar offered to lease the oval for 10 years and operate it as a commercial concern. He would pay the trust £20 per annum for the first five years and £30 for the second five and promised to erect a grandstand and other improvements that he would hand over to the trust at the end of his lease.

Trust chairman Joseph Payton was keen, thinking it would allow for development of the of the oval, while allowing the public free access to the rest of the reserve, but his fellow trustees were less enthusiastic and Hoar’s offer was declined.

In 1894 the Park Trust wrote to the Masterton Trust Lands Trust, offered the Park Trust a special grant, with a recommendation it should be used to build a grandstand.

The Park Trust was quickly into action, ordering a plan from Wellington architect Francis Penty and local builder Michael Williams finished the building by May 1895, at a cost of £212-12-6. The new stand was quickly pushed into service. In early June the Masterton and Star rugby teams battled it out on the oval, with spectators charged to sit on the grandstand.

Before long it was reported that the grandstand was being used for nefarious purposes – children had been “invading” the stand and later, the use of the grandstand by those seeking a free sleeping place caused concern. After that, the stand was securely locked and the windows barricaded, but before long the doors were forced open and the locks and bolts broken.

The grandstand got its first real workout in 1897 as the British Empire celebrated Queen Victoria’s record reign. Queen Street was extensively decorated and a huge procession made its way down from the school to the park, with many of the participants garbed in fancy dress. When they arrived at the park the children were packed into the grandstand – one estimate said there were 900. The town photographer Joseph Minnis lined the crowd up in front of the overflowing grandstand, with the winners of the decorated bicycle competition in the front row, and preserved the image for posterity.

In the following years the park was used extensively for athletic and cycling events. A cycling track was built around the perimeter of the oval, and spectators gathered in their hundreds to watch the sports. The oval also featured gathering of patriotic crowds to raise funds for the country’s efforts in World War One, and to gather to celebrate the peace following the war.

The first of three generation of British royals to visit the park arrived in 1920 – Prince Edward, then Prince of Wales, later to be the first king to abdicate. In 1927 he was followed by his brother Albert, later George VI, along with his wife Elizabeth. Their daughter Queen Elizabeth visited in 1954, and their grandson, Prince Charles visited with Diana in 1983.

In the 1930s it was athletics royalty holding centre stage on the park oval, and thousands gathered to watch local athlete Randolph Rose take on the best in the country, as well as visiting athletes.

By the 1960s the grandstand was starting to look a little shabby and the council was reluctant to spend money on it, thinking that a replacement may be more suitable. In the end the borough engineer reported it was structurally sound and it was saved.

In 1991 the grandstand received a tidy up and renovation. New changing rooms and showers were built in an extension outwards top Dixon Street, while the old ground floor dining room was replaced by a long room built upstairs by removing the top layers of seating.

The grandstand has served the community for nearly 120 years. Although the oval is no longer used for the majority of sporting events in Masterton, it is still used for major cricket games, and adds a special flavour to the village green-like atmosphere of the park.