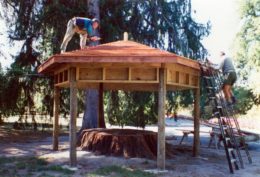 The Dendrochronology shelter covers the stump of a redwood split asunder by lightning.

Many of the North American conifers in Queen Elizabeth Park date from the time of the first plantings in the late 1870s. The redwoods and Douglas Firs dominate the skyline, but sometimes their very height places them at risk – especially in a stormy summer.

The summer of 1987-88 was noted for the frequency of its thunderstorms as well as the usual string of north-westerly storms damaging trees and tumbling branches to the ground. During one of these storms a very large redwood was hit by a bolt of lightning and split asunder. It was obvious the tree was a danger and would have to be felled. When the arborists counted the rings they realised it was one of McCardle’s original plantings of 1878.

Councillor John McDonald was keen to mill the timber from the tree, and use it somewhere within the park but found it was not very useful for construction work. He persuaded the council to erect a shelter over the stump, roofed with shingles cut from redwood. The walls on the shelter – called a dendrochronology from the Greek words for tree (dendron) time (chronos) and study (ology) – are covered with information on the park and district’s history. The shelter was built in 1991 and is a popular picnic site.