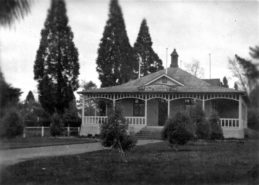 The Coronation Hall, opened in 1912, was the park’s second tea kiosk.

Shortly after the Masterton Borough Council assumed control of Masterton Park in the early 20th century, they embarked on a number of improvements, including the erection of tea rooms.

In June 1906 a couple of local carpenters offered to build a combined tea rooms, summerhouse, cloakroom and lavatory if Council would agree to buy the timber. Councillor Temple drew up plans which would cost about £125-150, less if the offer of free labour was accepted. The Masterton Band were keen to help, seeing the new kiosk could also act as a practice room. In late November 1906 the Council decided to try and erect the kiosk in time for the New Year’s Day sports. Incredibly, the tender was opened, closed, and let within a week, and the kiosk/band room was opened before the end of the year.

It quickly became apparent it was not big enough, and was also poorly sited, the main activity in the park taking place near the lake rather than behind the grandstand. Accordingly anew building was planned, partially funded with money granted to make the coronation of George V, and called the Coronation Hall.

This more substantial building was designed by Milton Varnham and built by local firm Rose and Mason for the cost of £626. It was opened on February 2 1912, accompanied by a full day’s sport, with swimmers in the lake, runner and cyclists on the oval, and Highland dancers and the Masterton Band performing.

The Coronation Hall’s popularity waxed and waned over the years. The hall was hired out for weddings and other functions, and for many years a small kiosk ran from the front of the hall while the main body of the building was used as an aquarium.

It gradually became rundown and Council struggled to find a use for it, but in 2001 property developer Doug Catley refurbished the building and opened a French styled restaurant, Café Cecille.