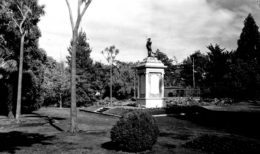 The Wairarapa Soldiers Memorial was officially dedicated in September 1923

Proposals for a fitting memorial to the soldiers who died in World War One were first aired in April 1916 and gathered momentum during the last years of the war. A committee was formed to erect an impressive monument, opting for a casting of sculptor Frank Lynch’s ‘The Last Anzac’

Unlike many war memorial statues, Lynch’s work shows an unkempt soldier, waiting to be evacuated from the beach at Gallipoli. He encapsulates New Zealand’s image of its soldiers – perhaps not the most polished in appearance, but nonetheless the man you want alongside you when the going gets rough.

It was obvious the memorial needed a commanding position in the town and it was quickly decided the Masterton Park was the obvious place. In May 1920 the Masterton Borough Council agreed to work with the committee and the site was decided in August 1922. The entranceway from the Pownall Gates was widened and the grand monument built.

A decision was taken to include only the names of those who died in the service of their country. Names were chosen from the entire Wairarapa region, the committee asking citizens to forward names for consideration. The names were not restricted to those who died overseas. Those who lost their lives in the influenza epidemic while serving were included, as were other soldiers who died of wounds after being repatriated. The list was submitted to the local branch of the Returned Soldiers’ Association before being finalised.

The memorial was dedicated during an impressive ceremony on September 16 1923 when over 2,000 people congregated in a windswept park. A short religious ceremony started proceedings, before Mayor Pragnell addressed the crowd, telling them nothing could add to the glory, courage and sacrifice of the 400 men and women whose names were engraved on the marble. William Downie Stewart, the Minister of Internal Affairs, was delegated to unveil the monument. He said the district was well-known for the support it gave the soldier in Featherston Camp during their training. He said those who were called to lay down their lives did so gladly, knowing they were doing it for their country and unveiled the monument “to the Grace of God and the memory of the fallen”.

Colonel Herbert Hart spoke on behalf of the returned soldiers, expressing their gratitude to the people of the district who subscribed the money to erect the monument to their fallen comrades. He said the path of the army was marked by wooden crosses in Egypt, Gallipoli and France. They were proud of the way the fallen had fought for King and country.

Two local politicians, George Sykes and Sir Walter Buchanan also spoke, Sykes saying it was recalled with pride how the boys answered the call to arms, and later the great deeds they had performed. The mothers of the country’s soldiers deserved the country’s thanks. Buchanan said he was proud to think there were many monuments erected in New Zealand, and also in France, Gallipoli and Constantinople – all carefully looked after. After the speeches the Last Post was sounded and the ceremony concluded with the National Anthem, ‘God Save the King’.

They whom this monument commemorates were numbered among those who. At the call of the King and country, left all that was dear to them, endured hardness, faced danger and finally passed out of the sight of men, by the path of duty and self-sacrifice, giving up their own lives that others might live in freedom. Let those who come after them see to it that their names are not forgotten. They died for freedom and honour