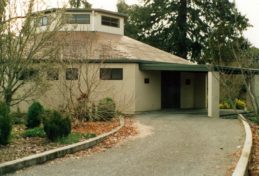 The Masterton community has supported a wide variety of brass bands over the years, the main band changing its name numerous times.

From the early 20th century the band’s practice room was located in Queen Elizabeth Park, firstly in the old Teak Kiosk, built in 1906 and located behind the grandstand. When the Coronation Hall was built in 1912, the old kiosk became redundant and for many years the band used it.

In 1984 the Masterton Municipal Band came to the council with plans for a new bandroom. The old rooms were in poor repair and unsatisfactorily for the band’s requirements. The band consulted parks superintendent Colin Pugh, who thought a site on Park Avenue, just west of the superintendent’s house, would be most appropriate. He suggested an octagonal building, reflecting the shape of the nearby fernery and band rotunda. The foundations for the new bandrooms were laid in late 1984, and the building erected largely by volunteer labour. It was opened on March 15 1986.