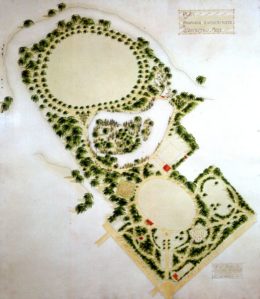 When Masterton was first settled in 1854 a 40-acre section was set aside as a “publick reserve” on the eastern side of Dixon Street. It became mixed up with the education reserves that formed its northern boundary and was not used as a recreation reserve for the first twenty years of the township. Henry Bannister, son-in-law of Joseph Masters, farmed the reserve, leasing it from the Wellington Education Board.

In 1868 the government, concerned about growing tension between Maori and pakeha, built a stockade near the Dixon Street line. It was never used as a redoubt but later held the town’s first agricultural shows.

In the mid -1870s townspeople became aware that their reserve had been set aside wrongly and petitioned parliament to have it returned. The government agreed and the empty paddocks were handed over to the fledgling Masterton Park Trust to administer.

Among their members was the energetic nurseryman and politician, William Wilson McCardle. He drew up a plan and the first trees were planted in 1877. Shortly afterwards the first playing fields were constructed from the empty ground in the centre of the reserve, cricket and rugby players laying out the oval shaped playing grounds.

The Masterton Park quickly became the sports centre of the town. The oval hosted the annual Caledonian Sports day, various rugby and cricket fixtures, the town’s first ballooning experiments, and many public entertainments. In 1895 a wooden grandstand was erected on the eastern side of the oval.

Early in the 20th century the situation of the park was much discussed, there being two different views of its future. One group wanted the Trust Lands Trust to take the park over, another thought the borough council more suited. The latter group won out and the council assumed responsibility for the park and immediately instigated a large number of improvements.

Large iron gates were erected at the southern entrance to the park, honouring the ex-mayor, Charles Pownall, and a cast iron and concrete band rotunda was built to commemorate the coronation of Edward VII.

In 1904 another 10-acre block was added to the park and “ornamental waters” were constructed. The park lake became popular for boating and swimming, major aquatic carnivals taking place soon after the lake’s completion.

Other sports appeared in the park too, with bowling and tennis clubs using grounds near the lake. In 1910 ladies swimming baths were built near the Bruce Street entrance.

In 1912 a ‘Coronation Hall’ was built to mark the coronation of George V. Built to overlook the lake, it replaced a smaller tea kiosk sited behind the grandstand.

The borough council was uncertain of the future of the park and in 1916 commissioned landscaper Alfred Buxton to prepare plans. Although not all the planned alterations were carried out, the pathway structure envisioned by Buxton largely remains.

The Masterton Beautifying Society carried out various improvements to the park, starting in the 1920s with the donation of the fern house and rose garden. The first children’s playground and the Wairarapa War Memorial, the cenotaph, were both opened in the early 1920s.

In the 1930s the Waipoua River was straightened and stop banked. A previous suspension bridge, near the hospital, was replaced by a new one, closer to the lake.

Following the World War Two the lake was expanded and renamed the Lake of Remembrance as part of a wider war memorial project. An avenue of scarlet oaks around the lake was dedicated as Memorial Drive. New swimming pools were built as part of the project and the women’s baths were converted into a sunken garden.

The park was renamed in honour of Queen Elizabeth following her visit in 1954.