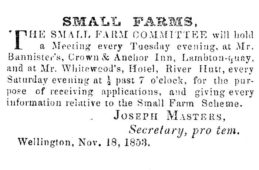 The Small Farm Association started in Wellington in 1853.

At 7 p.m. on Friday 18 March 1853 a well–attended meeting, called by a group of Wellington working men, discussed the establishment of a Society to promote the establishment of small farms. The meeting appointed a committee, three of whom who were to have a major impact on the future establishment of the Small Farms Association settlements of the Wairarapa plains – Joseph Masters, Charles Carter and William Allen.

Masters had started the ball rolling with a series of letters in 1852 under the pseudonym of ‘A Working Man,’ urging voters to support candidates who supported small farms. He imagined a Wairarapa where small farms would flourish on the fertile flat lands in the valley. He thought villages would become established, and small farmers would be able to enjoy schools and the “blessings of civilised society.” He was supported by the working class settlers of Wellington who were finding it difficult to obtain land near the city.

Masters’ call also found support from other quarters. Charles Carter, who had been immersed in liberal politics in England, had been a proponent of the small farm concept in a number of articles written in 1848. He set forth a plan of “systematic colonisation” whereby the Wairarapa plains were to be divided into 30,000 plots, each of five acres.

Governor Grey was familiar with the calls for the creation of small farm settlements and had promoted the creation of a society based on ownership of land by all classes. After support from Grey, Masters called for “Working Men” to come forward and take up shares “to purchase a good large block of land, (and) form your own village in the centre.”

The small settlers of the Hutt Valley answered Masters’ call too. Masters, Carter and Allen journeyed to the Hutt to attend a meeting which appointed Masters and H.H. Jackson to travel to Wairarapa to select a block. They met with Retimana Te Korou and his son-in–law Ihaiah Whakamairu at the Ngaumutawa paa and convinced the two chiefs that they would benefit by having towns established in their midst. Retimana agreed to sell some of his lands, and Whakamairu later visited Wellington with Masters to help arrange the sale.

Once Masters and Jackson returned from their trip the Small Farms Association was officially established. The scheme was temporarily halted by a lack of land, but purchases from Maori in mid-1853 gave the scheme impetus again. The Association had another hurdle to cross, however. After some confusion and disappointment it became apparent that there was no block large enough for the Association, and it agreed to take two blocks.

The Association rules were settled. There were to be two townships, each with 100 one-acre blocks, with 100 40-acre farms surrounding them. The townships were bought and surveyed by the Association, who then sold sections to the members, while the 40-acre farms were purchased directly from the Government. Meetings were held where applicants were informed of the details of the scheme, and applications received.

A special meeting was held on 9 December, 1853, for the subscribers to ballot for their choice of land. An excited crowd took part and by early 1854 they were preparing to take the journey across the Rimutaka Range to the as yet unnamed Small Farm townships of the Wairarapa plains.