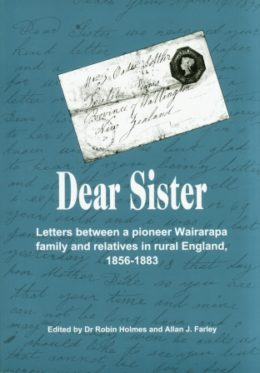 Jane Oates wrote a remarkable series of letters back to her family in Derbyshire in the 1800s.

A set of letters between sisters in Carterton and England provide an extraordinary glimpse into rural life in the 1800s.

Samuel and Jane Oates are almost legendary figures due to the Samuel’s first journey to Wairarapa. He brought goods from Wellington for Charles Carter’s run but while he rested at Greytown some gum trees were stolen from his wheelbarrow. One remains, a huge Eucalyptus regnans, in the grounds of St Luke’s Church on Main Street.

Jane Oates has left an equally remarkable legacy in letters that passed between her and her family, largely with her sister Margaret Morten.

Jane and Margaret were born in Monyash, north-west of Derby, to Richard and Jane Bonsall. In 1840 Jane married Samuel Oates, a farmer of humble origins, his father being an agricultural labourer. Margaret, although older than Jane, married later – she was 33 when she married the widower John Morten. In 1848, they took up a farm a few miles from Monyash.

Samuel and Jane Oates were also farming. The winter of 1852 was very trying, with bad weather and low prices. Following the death of their son William in August, Samuel looked for a way out and decided on the Australian goldfields. Jane was less sure and it was agreed that Samuel would send for his family when things had improved.

Fortune proved elusive in Victoria so Samuel came to New Zealand, arriving in Wellington in January 1856. He immediately found work with Charles Carter and bought land near Carter’s Wairarapa holdings, purchasing 60 acres in April. He sent for Jane and their five children to join him.

Jane was living with her parents at their farm and had fallen out with her brother Joseph, later saying his behaviour was the only reason she left. On the boat at Liverpool, waiting for the tide to turn, Jane commenced what was to be a twenty-six year correspondence with her sister.

Her arrival in New Zealand was unheralded and Samuel, at work on his holdings, had no idea his wife and family had arrived. Fortunately Carter noticed her name on the ship’s passenger list and sent word to Samuel.

Jane found life in New Zealand difficult. She wrote home that she could hardly sleep at night through fretting about those she would never see again except in her dreams. When her mother was fatally ill Jane longed to return but expense ruled out any trip, and Margaret advised her to forget the idea.

The letters that passed between the members of their extended family and friends give a unique insight into the way the families’ fortunes rose and fell.

The Mortens were still on their tenanted farm in Derbyshire where pig raising was important, then store lamb production, and later still, wool production. All the time the farm was also producing cheese.

Samuel Oates had 300 acres by 1866. He too was involved in many different aspects of farming, raising pigs, chickens, geese, turkeys, sheep and cattle, and also cropping.

The letters are also filled with medical troubles. Jane’s heartbroken letters following the death of her daughter Hannah in childbirth bitterly record that she never thought she would bury her children.

Margaret’s last letter to Jane was written in January 1883. She wrote that her health was not the best. Jane died at the family farm, Peach Grove, at the end of March 1883, and was buried alongside her daughter. Margaret died in July of that same year, and was buried at Monyash, next to their parents. Samuel Oates died in 1892.