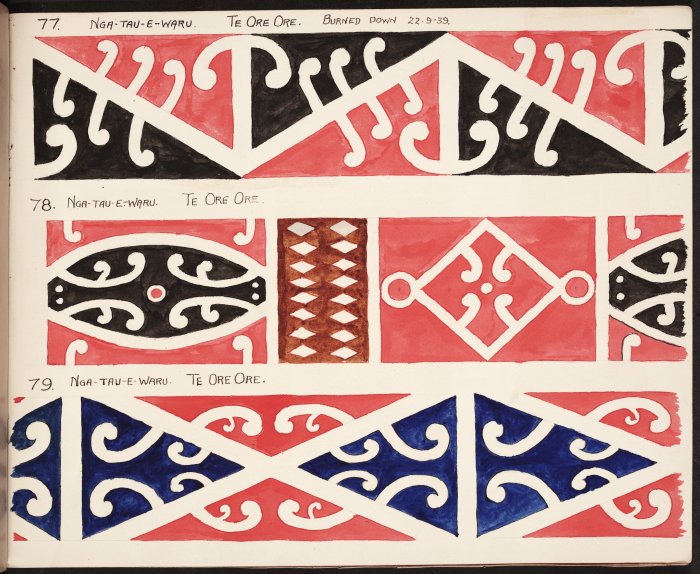 Maori have lived in the Masterton district for over 600 years. Until the time of pakeha settlement the majority of tangata whenua lived primarily in coastal areas, although some kainga were to be found in the interior, usually near rivers and lakes.

One of the closest marae to the township of Masterton is the Te Ore Ore marae on the banks of the Ruamahanga River to the east of Masterton. The principal people associated with this marae is the Ngati Hamua hapu of Rangitaane.

This marae was established in the early 1880s under the mana of the chief Wi Waaka, with two prophets instrumental in starting the carving of the wharenui, Paora Potangaroa, of Ngati Hamua and Te Hika a Papauma, and Te Kere, from the Wanganui area.

Shortly after work commenced the two men fell out and Te Kere moved away, telling Potangaroa ‘E Kore e taea te whakamutu I te whare I mua atu I nga tau e waru’ – ‘it will not be possible for you to build this house in eight years.’

This spurred the carvers on and when the whare was completed within a year Potangaroa called the house Nga Tau e Waru, a reminder of Te Kere’s failed prophesy.

The house was very large – 30 metres long and 10 metres wide – and was decorated in an unusual manner. The front wall, for example, was covered in tukutuku. The heke pipi, the front barge boards, were also unusually decorated with a mixture of carved figures and painted decoration, a blend of kowhaiwhai and carving designs.

When it was officially opened on 5 January 1880 the local newspaper reported that people from as far away as Waikato gathered for the ceremony.

It was in March 1881 that the whare hosted its most important meeting, as Potangaroa unveiled a matakite, a vision in the form of a flag he had made. When he unfurled the flag he asked those present to interpret it. There was a lot of discussion and various chiefs found different meanings in the vision. There was no agreement about its purpose.

Shortly afterwards a group went to Wellington to order a marble monument to be erected in the whare, to mark the meeting and a similar meeting held forty years before. In early April the stone was unveiled inside the house and a few days later Paora came forward to tell his followers they should no longer sell nor lease land to pakeha, they should incur no more debts and refuse to honour old debts.

In 1921 the Wanganui prophet T W Ratana visited the house. A number of locals told him they were uncomfortable with the stone inside the whare. Seven years later Ratana returned and, with the help of a group of especially selected young men, moved the monument from house to the north-east part of the marae. Underneath the monument the prophet found greenstone, a parchment, human bones, and a bottle containing coins.

In September 1939 the whare Nga Tau e Waru burnt down.

The people determined to build a new whare and Te Nahu Haeata, who lived at the Hiona kainga on the other side of the river, was given the job to undertake the carvings. He undertook most of the work, assisted by Hohepa Hutana. The new whare was opened on 28 March 1941. In recent years many of the carvings have been replaced, and the new Nga Tau e Waru house continues as the focal point for Ngati Hamua.