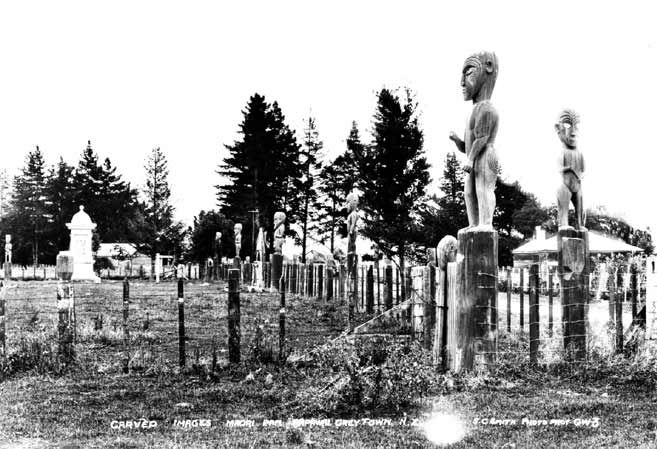 Tekoteko, carved figures of ancestors, stand guard on the perimeter of the Papawai marae, overlooking the marble monument to Tamahau Mahupuku.

When the large Tauherenikau block was bought by the Government in the early 1850s, a block was set aside for the creation of a church village at Papawai just south of the Waiohine River, adjoining the land granted to the Small Farm Association for their settlement of Greytown.

The Government built a flour mill but it caused conflict when Manihera maintained it was his. The Church of England constructed a school, called St Thomas’, which was opened in December 1860, but it never thrived, and closed in the mid-1860s after Maori did not send their children to the school.

The town, sometimes called Manihera Town, was also struggling and was in a long decline during the 1860s and 1870s, but by the 1880s it was assuming a more dominant role in Maori society.

Manihera had been Papawai’s main chief during its establishment years. He was a keen supporter of leasing land, but he was inclined to ignore the rights of other owners. Once he was forced to flee into the Tararuas to avoid his relatives, who were so upset they were talking of killing him.

Over the years he became a frequent witness at the Land Court, arguing for his hapu’s rights. As he aged he looked for a successor to develop his vision of Papawai assuming leadership for Wairarapa Maori, chossing Tamahau Mahupuku to deal with issues relating to the people, and Hoani Te Whatahoro Jury to take care of land and negotiations with the Government.

Mahupuku was of Ngati Moe and Ngati Hikawera descent. His second marriage, to the widow of the chief Matini Te Ore, secured his place at Papawai. His appointment, and the wealth generated by the hapu’s extensive land holdings, led to his mana increasing, and when Manihera died in June 1885 Mahupuku was his natural successor.

Under Tamahau’s leadership Papawai underwent an extensive building programme. The house Hikurangi was opened in 1888, and three others quickly followed : Waipounamu, named for the people of the South Island; Aotea, for the Taranaki people, and Potaka, after a famed Wairarapa marae.

In 1897 the new buildings accommodated two sessions of the Maori Parliament, the Kotahitanga, and the newspaper Te Puke ki Hikurangi was first published. Although originally intended to publicise the work of the Kotahitanga movement it was used to deliver a wide range of news, including the publication of tribal history until 1913.

In 1898 Prime Minister Richard Seddon drew up a bill for the administration of Maori land that caused a storm of protest in Maori circles. Tamahau held large hui at Papawai to discuss the issue, which had split the Kotahitanga movement and he found himself at odds with many members over his support of Seddon.

Mahupuku is said to have spent more than £40,000 between 1894 and 1904. Under his guidance many hui were held to record the history, whakapapa and customs of the Maori which were the source of much of our knowledge about Maori life and beliefs.

Tamahau died in 1904. One of his last projects had been the palisading of the marae at Papawai. Many totara logs were gathered, and after his death these were carved into eighteen large tekoteko, carved figures, representing important ancestors. Uniquely, the tekoteko face into the marae to represent peace, rather than facing outwards to confront enemies. The Government financed a large marble monument at Papawai, commemorating his role in bring the two races together.

Tamahau’s death led to the role of Papawai becoming diminished. No-one could afford the lavish hospitality of the past, and although other leaders arose, none had his financial strength.

The elements played their part in the diminution of Papawai too. The hurricane force winds of October 1934 destroyed the Aotea-Waipounamu complex and the 1942 earthquake destroyed the marble monument to Tamahau. Even the tekoteko suffered from dry rot.

Papawai has undergone a restoration. Tamahau’s monument has been re-erected and a project was initiated in the early 1990s to preserve the few tekoteko that remained. Today there are still Wairarapa ancestors standing watch over Papawai, the seat of the Maori Parliament.