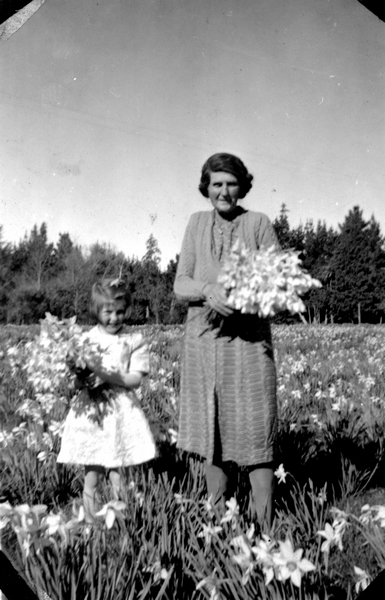 Middle Run daffodils have been popular with the crowds for over fifty years.

The area now occupied by ‘Middle Run’ farm was owned by Wellington-based businessman and farmer, and Carterton benefactor, Charles Rooking Carter, the central part of his extensive land holdings in the area. In 1889 it was purchased by Alfred Booth, the son of William and Jane Booth.

The Booth family were sawmillers in the Ohariu Valley near Johnsonville and Alfred worked in the family mill. In 1874 he married Mary Ann Bryant, daughter of fellow Ohariu settlers James and Mary Bryant.

As the Booth family extended their milling operations further north, to both Upper Hutt and Taratahi, Alfred and Mary Booth moved north to Carterton. They first lived on High Street, originally in a cottage then in a more substantial house near the mill at the north end of town. Alfred operated the mill in partnership with his father and his elder brother William.

1n 1889 Alfred took advantage of the opportunity to purchase the middle portion of the extensive Taratahi Plans holdings of Charles Carter, 2150 acres, for which he paid just over five thousand pounds, and built a substantial two-storey house, named ‘Harwarden’.

Although his main farming efforts were pastoral Alfred also followed agricultural and horticultural interests. He grew oats and potatoes, and erected three glasshouses. The first of these was devoted to begonias and the second to ferns. The third was dedicated to propagating new plants, especially his favourite flowers, daffodils.

The front paddock is said to have been ploughed and worked up to a fine tilth before half a ton of bulk bulbs was spread carefully throughout the paddock. He imported new varieties from the Dutch nurseries and cross-pollinated among these varieties to raise his own new hybrids. He named his new varieties after family members, and by 1912 he was producing his own and other varieties for sale to the general public.

Alfred Booth died in 1918 and the ‘Middle Run’ property was subdivided among his three sons, William Henry (known as Henry), Alf and Bert. Henry inherited the homestead block.

In the 1920s Alice Booth decided to put the blooms in the front paddock to good use for the community. Groups of women picked the blooms and they were sent to the Wellington vegetable and flower market with local grower Willie Wong. The proceeds from the sale of the flowers (usually about sixpence a dozen) were given to the recently-formed Carterton branch of the Plunket Society.

This proven a lucrative source of funds for the Society; by the early 1950s it was earning over £100 annually. But it was also hard work with teams of pickers required and some thought was given to try and reduce the effort required.

It was decided to open the gardens to the public in the late 1950s. An entry fee of two shillings entitled visitors to pick a bunch of flowers for themselves and hundreds of people took advantage of the opportunity to gather their own flowers. Unfortunately some took advantage of the chance and in the end a quota had to be introduced so that a fairer distribution could be guaranteed.

The ‘Middle Run’ daffodils, planted over 100 hundred years ago have raised many thousands of dollars for the Carterton Plunket Society and Daffodil Day had became so much part of the way of life in Carterton that in 1995 mayor Georgina Beyer successfully laid claim to the town being the Daffodil Capital of New Zealand.

All from a half a ton of paddock bulbs.