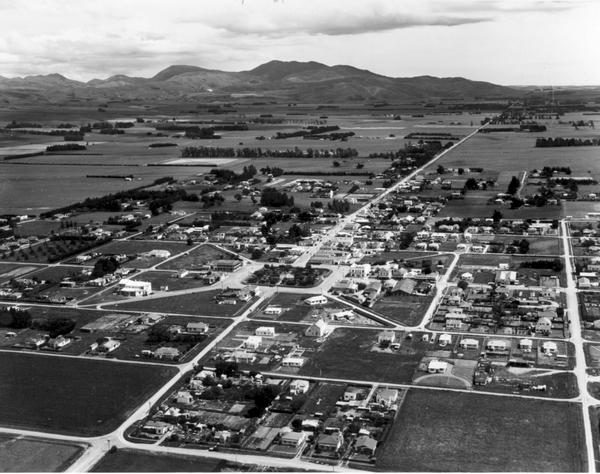 Martinborough was planned in the shape of the Union Jack.

Visitors to Martinborough might not notice something unique about the way the streets are laid out but anyone flying over the township would realise instantly – the streets are in the shape of the Union Jack, and it is all thanks to founder John Martin.

There had long been a small Maori settlement known as Waihenga on the banks of the Ruamahanga River, then a small settlement slightly to the south of the main part of the current town, established in 1870 and complete with a church, a general store, a school and a hotel. But it was John Martin’s 1879 subdivision of a small portion of his extensive landholdings in the area that led to the establishment of the town which he modestly named after himself. He also chose a peculiar method to name most of the streets, commemorating various parts of the world he visited on an extensive tour.

The new town developed slowly, but gradually established itself as a service town for the rural hinterland it served. A failed attempt to establish a railway line to Featherston just before World War One hampered growth a little.

In common with many small rural towns, the 1960s brought hard times as businesses centralised and services were starting to be withdrawn. A surprising saviour came in the form of a group of Wellington scientists looking to establish a boutique winery. Unable to afford the more expensive land in established areas, and looking for somewhere close to the capital, they chose the dry terraces near Martinborough in the 1970s. It proved to be a good choice, as they found many varieties grow well in the dry Wairarapa summers, especially pinot noir.

The wine industry has fundamentally changed Martinborough. Ordered rows of carefully cared-for vines have largely replaced the sunburnt grasses struggling to provide nutriment to a small number of sheep on the dry terraces. Instead, cellar sales have encouraged the establishment of cafes, and Martinborough has become a popular destination for visitors, with refurbished (and even relocated) hotels and other accommodation an important industry in the town. It now hosts a sell-out wine and food festival – Toast Martinborough – music concerts, and the hugely popular Martinborough Fair, held twice-yearly.

Martinborough is also the gateway to the south coast, with many visitors choosing to spend time at the historic Lake Ferry Hotel on the shores of Lake Onoke, where diners can feast on fresh food while enjoying the million-dollar views across the lake and sea. Further around the coast are the remarkable Putangirua Pinnacles, while further yet lies the charming fishing village of Ngawi where a cluster of bulldozers and other tractors, required to launch fishing boats, lines the side of the road. The road ends at the Cape Palliser lighthouse, where a stiff climb leads to a spectacular viewing platform. The rocks near the lighthouse are home to a large colony of seals.

Closer to town, the Ruakokopatuna area features two wonderful natural features – glow worm caves, readily accessible on foot, and the remarkable Patuna Chasm, where an eerie landscape has been formed by the Ruakokopatuna River as it flows through limestone country.