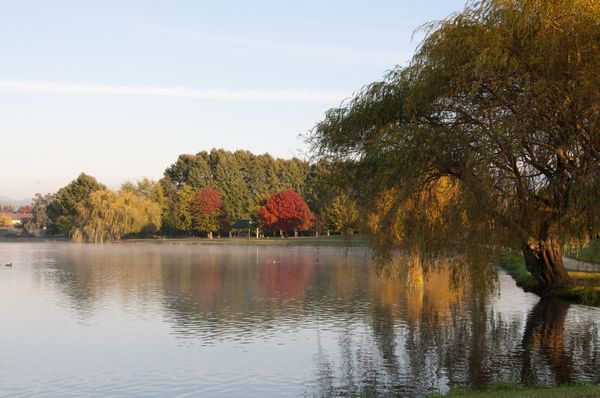 Henley Lake is a popular recreation area in Masterton.

Masterton has no natural lake nearby and for many years its citizens and politicians looked for ways to create ‘ornamental waters’. A water supply dam on Lansdowne Hill, behind the Hansells factory, was a popular site from the 1890s until 1924 when it was destroyed in a flood.

The Masterton Park Lake was formed in the early 1900s, on land recently added to the park. A horse-drawn scoop was used to remove the stony soil then clay was added to ensure that the bottom of the lake was “puddled” in. A line was taken from the Waipoua River (which then ran a lot closer to the park than it does today) and Masterton’s first ornamental lake was created.

In the 1930s a group of local people led by Henry Major, farmer Jack Bennett and Wairarapa College teacher Harry Glen formed a geological society, to study local natural history. On one of their trips they studied the waste lands on the northern banks of the Ruamahanga River near Colombo Road, and came to the conclusion that this land would be suitable for a fresh water lake. It then housed a small dairy farm and a sewage disposal system for Lansdowne.

In 1966 Henry Major revisited his dream of creating a fresh water lake for Masterton. He convinced a number of his fellow citizens of the worthiness of the plan, and formed the Henley Trust with Eric Hodder, Jim Long, Don Spiers, Jack Mackley, Bob Dunderdale, and John Maunsell.

The name itself probably gives some indication of their motivation. They wanted to create a lake of at least 100 acres, large enough to hold rowing regattas, and for small yachts. Their concept was simple. They would mine the gravel found just underneath the surface and use the royalties to fund the further development.

In 1972 the Masterton Borough Council backed the scheme as part of the town’s facilities. The Masterton County Council also supported the scheme, as did government authorities. The first plans were drawn, showing a large lake filling almost all the site.

During the 1970s and 1980s gravel was mined and large empty pockets created. In 1982 the Masterton Licensing Trust announced it supported the plans for the development, giving it “Major project” status. The Henley Trust engaged Wellington landscape consultants Boffa Jackman and Associates to develop a concept plan. The plan, which called for a ‘Fantasyland’ style development, complete with miniature trains, paddle steamers, met with community opposition. Many thought that the idea grandiose and a more passive facility was called for. In the end the plans were modified.

Even before the Boffa plan, the 100 acre lake was stymied. The Wairarapa Catchment Board had strong reservations about the sustainability of a large lake and a smaller version, of about 30 acres, was created.

In 1985 local engineer George Evans drew the final plans for the lake and a contract was let for the construction. In 1987 a tree lover’s appeal was started and over 3000 trees were planted around the lake. In 1988 the waters were opened and the lake was filled for the first time. As an added attraction over 1500 rainbow trout were officially placed into the lake. They were soon joined by a flood of unofficially released perch.

Masterton architect Neill Inkster joined the trust in the late 1980s. His input was substantial, and he designed many of the lake features.

In 1992 the administration of the lake was handed over to the Masterton District Council. Since then community groups have been involved in projects around the lake and the wilderness areas.