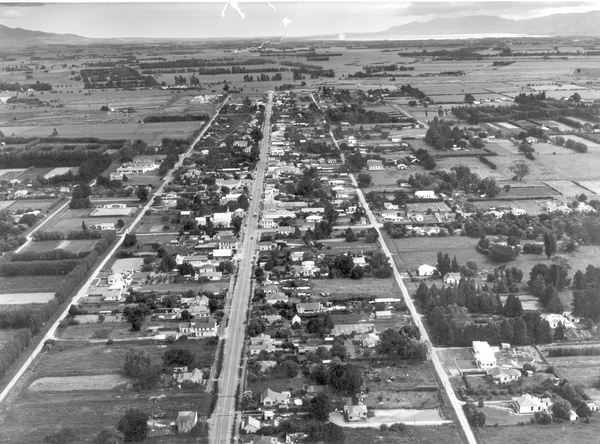 Greytown was the first of the Wairarapa towns to be settled, in March 1854. It was formed under the aegis of the Small Farms Association, a group of Wellington and Hutt Valley settlers of small means who were worried that the wealthy were in a position to buy the Wairarapa land that the Government had purchased from tangata whenua, and persuaded the Government to set aside a portion of land for them. The Association ended up with two pieces of land, one alongside the Waiohine River, and the other northern piece alongside the Waipoua River. The southern town was named after Governor Grey, a strong supporter of the scheme, while the northern town was named after the scheme’s instigator, Joseph Masters.

For a long time Greytown, the first planned inland town in the North Island, was the largest town in Wairarapa, but its proximity to the Waiohine River was to become problematic in the 1870s, when a series of floods swept through the town, and the Government constructed the railway to the west of the township.

Greytown was the focus of the burgeoning conservation movement in the late 1880s, the newspaper proprietor William Nation promoting New Zealand’s first Arbor Day in 1890. A few of the trees remain, planted at the southern boundary of the township, and the town is well treed to this day. The most significant of these is the Samuel Oates gum tree, in the grounds of St Luke’s Church. The huge Eucaplytus regnans was being transported by wheelbarrow to the Carterton district by Samuel Oates. He reputedly took a break at the ‘Rising Sun’ hotel to quench his thirst and upon recommencing his journey found the half a dozen trees had been removed. They were planted though the town, but the churchyard giant is the only one left standing.

Later it was trees of another kind that brought fame to Greytown, when grower James Hutton Kidd started cross pollinating apples. He introduced a number of varieties – ‘Kid’s Orange Red’,’ Telstar’ and ‘Captain Kidd’ – but his best was ‘Gala’, the apple that lies at the foundation of the New Zealand apple industry. Fruit and vegetable growing was a very important part of the Greytown economy, but its impact has diminished in recent years.

Papawai marae, to the east of Greytown, was established at the same time as Greytown. It became one of the most important Maori centres by the late 1890s, when, under the leadership of leader Tamahau Mahupuku, it became the meeting place of the Kotahitanga, the Maori Parliament. Mahupuku also supported his own band – the Hikurangi Brass Band – and published a Maori language newspaper, ‘Te Puke ki Hikurangi’. The palisades around the marae contain a unique feature. Eighteen carved figures were erected around the perimeter representing notable ancestors, and the pakeha settler William Mein Smith. Uniquely, they face inwards, to symbolise peace, rather than facing outwards to challenge enemies. Despite some buildings being damaged in a storm in 1934 the marae remains an important cultural centre.

Greytown has become a popular weekend destination for visitors, with a great range of eateries, hotels and antique shops, all set off by one of the most complete sets of Victorian buildings in New Zealand, the former Greytown Borough Council Chambers and the old Bank of New Zealand being two delightful examples.

For those interested in history, the Cobblestones Museum, with a wide range of heritage items on display, is a must-see.