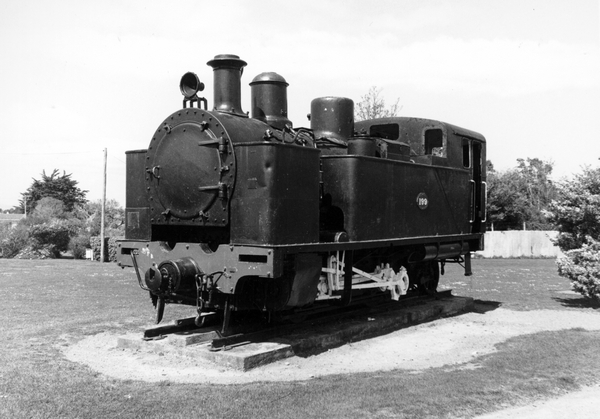 Featherston was an important railway town in the days of steam locomotives.

Nestled under the Rimutaka Range, Featherston, the southern gateway to Wairarapa, is a town crammed with historic interest. The first settlers to live on the site were the redoubtable Henry Burling (who lived to well over 100) and his family, who operated a hotel at the foot of the hill. The area was known to Maori as Pae-o-tu- Mokai, but became known to pakeha as Burlings.

The Wellington Provincial Government, perhaps spurred on the successful establishment of Greytown and Masterton, decided to lay out a town where the Rimutaka Hill track came out on to the plains in 1857. They named the streets after the various members of the Council – apparently the length of the street reflects the importance of the member, with the township’s new name being given in honour of the Superintendent, Dr Isaac Featherston.

The settlement was not an immediate success – land prices were high and soil of dubious quality – but when the railway arrived in Wairarapa in the 1870s the township pushed ahead. At one time Featherston had the busiest railway station in the country for shipping stock, with carriage-loads leaving to go over the Rimutaka Hill each day to freezing works in the Wellington area.

The railway was also to provide Featherston with an important heritage destination. The eastern slopes of the Rimutaka Range are more precipitous than the western, and some specialised engineering was called for to bring the railway tracks over the hill from Wellington. As well as a number of tunnels, an extra track was laid between the usual rails, and Fell engines were used to move carriages from Cross Creek to the Summit Station. These had a special set of central wheels which would grip the central track for extra grip. When the Rimutaka Rail Tunnel was opened in 1955 most of the Fell engines were scrapped, but one was presented to the township of Featherston. It now provides the main attraction at the Fell Engine Museum in the centre of town.

Featherston’s other claim to heritage rests on land slightly to the north of town, where two different military camps were constructed. During World War One a major training camp was established, with up to 8,000 men in training at any one time. The camp included 16 dining halls, 17 shops, its own hospital and post office, and a picture theatre. After completing their training the soldiers marched over the Rimutaka hill road. In the 1918 influenza epidemic over 160 lost their lives at Featherston Camp.

The camp was disestablished following the war, but rebuilt partially during World War Two to hold Japanese prisoners of war. In February 1943 some of these prisoners went on strike, refusing to work. When guards tried at detain one of the leaders, Toshio Adashi, the prisoners began throwing stones and a warning shot was fired at them. A second shot wounded Adachi and the prisoners tried to overpower the guards. In the resulting shooting 48 Japanese were killed or mortally wounded. One New Zealand soldier died from a ricochet bullet.

A park on State Highway 2 opposite the camp commemorates the military presence in World War One and Two.

With its proximity to Wellington, and a usually reliable commuter system, Featherston is a popular place for Wellington workers looking for an affordable house.