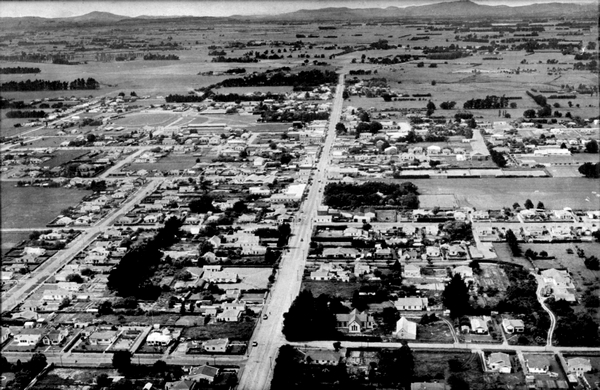 Carterton, astride State Highway 2, was founded in 1857.

Carterton, the daffodil capital of New Zealand, is Wairarapa’s second largest town. Originally known as Three Mile Bush, it was established in 1857 on the road between Greytown and Masterton. Its name was changed to commemorate Charles Rooking Carter, a local landowner and benefactor to the town. As well as supporting the town’s library, he established a large conservation reserve close to the town, and also funded the Carter Home for Aged Poor Men from his estate.

Carterton’s first major industry was timber milling, with a large amount of land being cleared, especially to the west of the town. Once the land was cleared it was used for dairy farming, which remains an important economic activity for the town and its surrounding rural districts.

Among the timber milling families who later turned to farming were the Booths, one of whom, Alfred, took over part of Charles Carter’s holdings and established ‘Middle Run’ station. He was a passionate gardener, loving daffodils above all else. He grew the latest varieties and bred many of his own, as well as establishing large paddocks of naturalised bulbs. These paddocks have been opened to the public each spring for nearly 80 years, the money raised being donated to local charities.

Carterton has recently opened an award-winning Events Centre, which incorporates the town’s venerable library as well as providing modern, flexible, spaces for all manner of events, shows, exhibitions, meetings and community gatherings.

The district is home to a number of attractions. The nearby rural area of Gladstone runs an annual Scarecrow Festival based at the school, where large numbers of skilfully constructed scarecrows are on display. The nearby Parkville Mushroom Factory has made innovative use of an old dairy factory to produce an exciting range of table fungi.

A near-by hill houses Stonehenge Aotearoa, a full-sized adaptation of the English version. Parties are welcome to call and see the henge, and special events are programmed at important astronomical dates, including druidic rites at the solstice and annual celebrations of Matariki, the Maori New Year.

To the west Mount Holdsworth provides one of the most popular entry points to the Tararua Forest Park, with an extensive camping ground on the banks of the picturesque Atiwhakatu River, with plenty of swimming holes for those brave enough to plunge into the mountain-fed stream. There are plenty of walking tracks in the area, ranging from the easily achieved stroll through to Donnelly’s Flat, through more challenging round trip up the Atiwhakatu River, then up to Jumbo Peak, along the tops to Mount Holdsworth itself, then back down via Powell Hut. This is a one or two day trip, although the best competitors in the annual mountain running race scarper through in 2½ hours.