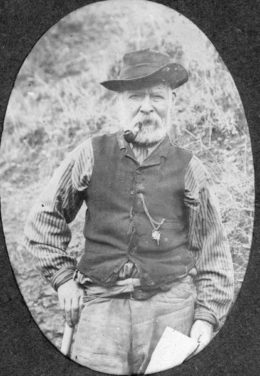 New Zealand’s most notorious killer was the Irishman Tom Long – and he got paid for doing it.

Tom Long was a 19th century celebrity, known the length and breadth of New Zealand and newspapers regularly reported his antics in detail. He was a habitual criminal but did not commit crimes of great moment – his specialities were drunkenness, disorderly behaviour and vagrancy. He was reportedly convicted on over 200 occasions but Tom Long was best known for a more sinister reason – he was a known killer, the Government’s hangman.

His career is hard to track. He claimed he started his killing in the Indian army but his first New Zealand execution can be dated to Picton in early 1877 when he hanged William Woodgate, previously found guilty of the murder of a child he had fathered on his niece Susan, then only 14.

Locals were disgusted by Long who, while adjusting the cap on Woodgate’s head, had said “Good bye old fellow, I wish you a pleasant journey. You’re only going a few days before us; perhaps I might follow you tomorrow, or the next day, myself.”

There was speculation as to the hangman’s identity. After the hanging he quietly left the rear of the gaol and raced to the port, where he boarded the Hinemoa for Wellington.

From there, Tom Long went to Hawke’s Bay, where he was imprisoned for drunkenness. In late 1879 he complained of police harassment. Charged for using obscene language, he said he had hanged a man in the South Island and it was always brought up against him, agitating him and making him use bad language. He said he was always being “run in” by some policeman, with a charge of obscene language added.

He was a suspect in January 1881 when John Pierce was killed in a fire at Napier’s Albion Hotel. Tom Long had been found drunk near the hotel, having previously said he would do something that would make the headlines. The coroner’s jury decided the fire was very suspicious but Tom Long was not charged.

In court in 1884 he complained the Hawke’s Bay Herald had referred to him as the “notorious Tom Long”, saying they had taken his character away, suggesting he should be called the “meritorious Tom Long”.

His most famous case was the hanging of Williamina “Minnie” Dean, who had been convicted of killing the baby Dorothy Carter and was suspected of having killed other young illegitimate children. Although there was widespread revulsion at Dean’s crimes there was also general disquiet at her execution.

During the 1890s Tom Long was a swagger, living in lower North Island where he became a well-known, if not well-liked, figure. At least twice, he came close to meeting the traditional fate of hangmen – being hanged.

He told a football team, travelling in a train from Taihape of his part in Minnie Dean’s tragedy. The footballers were upset and one of the players tried hanging him from the hat rack by using a rope he had been using as a belt. He was rescued by the conductor.

Later, a remarkably similar event took place at the Tauherenikau Hotel just north of Featherston. After losing money at the races Long tried to auction Minnie Dean’s boots and hotel patrons had a noose around his neck when he was rescued by the publican.

Long’s last victim was James Ellis, also known as John McKenzie, who had killed Leonard Collinson at Te Awaiti Station. He was found guilty, and hanged in Wellington’s The Terrace gaol in 1905.

Tom Long, New Zealand’s Irish-born hangman, died in December 1908 while bush-felling at Kuangaroa near Wanganui. A tree fell on him and his death was ruled as accidental, but those who knew him and his reputation were sceptical, thinking the death was planned, the tree being deliberately felled. True or not, it would have been a dramatic death for the man who had been the country’s biggest killer, for many years New Zealand’s official executioner.