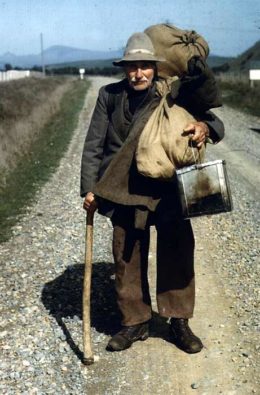 Russian Jack was known all around the lower half of the North Island, and is remembered for the large loads he carried.

The last of the swaggers

The most famous of all Wairarapa swaggers arrived, rather abruptly, in New Zealand on 23 June, 1912. The man officially known as Barrett Crumen but known to all as ‘Russian Jack’ was born in Latvia on 26 March 1878, in a small village called Alexandra. At the age of 24 he joined the merchant marine and was on the British ship ‘Star of Canada’ when she was caught in a southerly storm off the coast of Gisborne.

Russian Jack later recalled that he spent time on small coastal ships in New Zealand, and then took to working on land. Many people remembered him as an immensely strong man who worked as a scrubcutter and shed hand at Awhea Station for many years. He was also recalled for his prodigious appetite and his fondness of tobacco.

Russian Jack predominantly walked the roads of Manawatu and Wairarapa, but also exploring much of the North Island. He disliked the Manawatu Gorge and always took the Pahiatua Track to move from Wairarapa to Manawatu, carrying the biggest swag of any of the ‘gentlemen of the road.’

He was particular about his toilet, and although he wore old and much-repaired clothing, he was meticulous about cleaning up any whare he was allowed to sleep in. His clothing was lined with layers of newspaper, and he stuffed his ears with brown paper wads soaked in mutton fat to “keep the bugs out” and to keep the cold out. He rubbed dripping onto his chest as a protection against infection.

Although not averse to sleeping in a whare or an outbuilding of some kind, Russian Jack also had a number of bivouacs along the roads he journeyed. These shelters were constructed out of old branches and whatever cladding he could find. He was also known for sleeping in culverts and under bridges.

Originally very tall and strong, Russian Jack seemed to shrink as he aged. He became bow-legged and his feet were obviously giving him more and more trouble. One foot seemed to be permanently bent over. In mid-1965 he was admitted to Pahiatua Hospital suffering from frost bitten feet. He was shortly transferred to the Buchanan Ward of Greytown Hospital, where he died on 19 September, 1968.

There is no doubt, though, that Russian Jack was the last of the real swaggers, and is remembered with great affection in the Wairarapa countryside. He is remembered as a man of honour, one whose “innocence shone through his bright blue eyes”; he is recalled as being good-natured and courteous.

“He was a tailor-made man – only one of his kind ever made.”

So why did this Latvian-born sailor leave the sea, and take to the roads of the North Island of New Zealand? In an interview with Jim Henderson in Greytown Hospital Russian Jack, or Barnis Krumen, gave the answer himself.

“Man oh man I vos FREE! Free to have a beer, have a smoke, -happy what you can call all the time, you know. They was free days.”