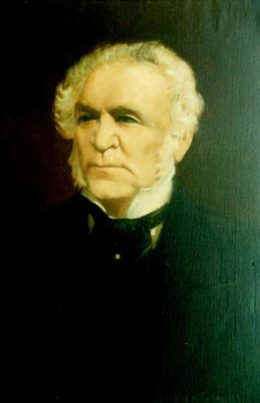 Joseph Masters, the originator of the Small Farms Association that led to the establishment of Masterton.

Joseph Masters was born in 1802, in Derby, England, where his father was a leather breeches manufacturer. His father died when he was very young and he was sent to work in a silk mill, threading the bobbins. After a troubled childhood up he ended up living with his uncle in Rugby, where he served an apprenticeship as a cooper.

Masters seems to have been driven by a strong desire to better himself, and once he had gained his trade he left, serving as a Grenadier Guard before working as a policeman and jailer. In 1826 he married Sarah Bourton, and in 1832 Joseph Masters, his wife and his two daughters migrated to Tasmania, where Masters first found work as a cooper serving the whaling industry then later as a jailer at Oatlands.

Joseph Masters was still looking for ways to improve himself, and left Tasmania in 1841, headed for New Zealand via Sydney. He landed in the Bay of Islands, but quickly made his way south to Wellington where he started business as a ginger beer manufacturer, but by the mid-1840s had reverted to his old trade as a cooper in Lambton Quay.

When Masters saw others obtaining large tracts of land, he wrote a series of letters to the Wellington Independent promoting the concept of small farm settlements. His plan was that groups of working men should pool together and buy blocks of land from the Government that they could subdivide among themselves. Each of the members would own a small town section and a 40-acre farm.

After a meeting in March 1853, a Small Farms Association was formed and Masters and C.R. Carter visited Governor Grey, convincing him of the merits of their scheme. He was happy to support their scheme for settlement in Wairarapa as long as they convinced local Maori to sell. Masters and his fellow committee member H.H. Jackson tracked to Ngaumutawa paa to meet with Retimana Te Korou, who listened carefully to what they had to say. After consulting with his family members he decided it would be to their advantage to have the new settlers on land near his village. His son-in-law Ihaiah Whakamairu (who had married Erihapeti) was dispatched with the small farm proponents on their return to Wellington, to arrange the sale. Retimana did not sign the eventual deed of sale, although he did sign to other sales around Masterton. His family’s names appear on the document however: Karaitiana, Erihapeti and Ihaiah.

Masters was not one of the first settling party of small farmers that arrived on May 2, 1854 – he arrived shortly afterwards. With his great energy and his determination to “get on”, Masters threw himself into establishing a future for himself and his family. As well as successfully farming his lands he represented the area in the Wellington Provincial Council, and was a vigorous promoter of the Trust Lands Trust. His was a strong influence over the small community that bore his name, an influence he jealously guarded until his death in December 1873.