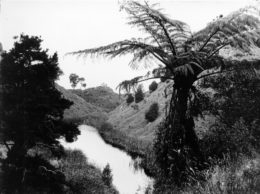 Lake Raupo, one of the Hidden Lakes at Kopuaranga, formed in the 1855 earthquake.

New Zealand sits right on the boundary of two giant tectonic plates – the Australian plate to the west, the Pacific plate to the east. These two plates grate against each other, slipping as they crash together, resulting in the active volcanism of the central plateau, and the juddering earthquakes the country experiences at regular intervals.

Scientists believe New Zealand was under water 20 million years ago, but these two plates pushed the central mountain systems out of the sea, the Tararua Range probably being created within the last two million years and erosion from these hills has created the central Wairarapa valley.

The Wellington/Wairarapa area is one of the most earthquake-prone in the country, with major faults running along the axis of the Rimutaka and Tararua ranges, and other faults tracking across the valley in a north-east/south west direction.

The first inhabitants of the Wairarapa region had their own explanation for what was happening. To Maori, earthquakes are caused by the god Ruaumoko, the son of Ranginui, the sky, and Papatuanuku, the earth. Ruaumoko was just an infant when his parents were pushed apart by their children. Rangi was so upset by the sight of his wife below him that he cried causing floods, Ruaumoko’s brothers turned their mother over, so Rangi could not see her. Ruaumoko, still attached to her breast, was carried to the underworld where his pacing about causes earthquakes and volcanoes.

The largest confirmed pre-European earthquake was the Haowhenua – ‘land swallower’ – about 1500, centred in the Wellington/Wairarapa area. It turned the island of Motukairangi into the peninsular we call Miramar today, and lifted Rongotai out of the sea. It would also have had similar effects throughout Wairarapa.

For the first European settlers to New Zealand earthquakes were a rude shock, as most had come from Great Britain which has few earthquakes.

A few short years after Bidwill, Weld and the other pioneers of Wairarapa pastoralism made their way around the coast with their sheep, they were struck by the magnitude 7.5 Marlborough shock. Although there was little damage in Wairarapa, the major earthquake fundamentally altered the Wellington landscape, smashing almost all the brick and stone buildings, while those of timber were largely safe. It was a lesson learnt quickly and wooden construction became the norm.

That experience was to serve the town well when the next larger earthquake, the most powerful ever recorded in New Zealand, struck on 23 January 1855. The magnitude 8.2 shake which lasted 50 seconds was caused by movement along the Wairarapa Fault, the land rising more than six metres in places, while the lateral movement exceeded 12 metres.

A huge tsunami crashed ashore along Palliser Bay, taking wool and other goods stored on the beach at Te Kopi, and then returning it with the next wave.

Liquefaction was also prominent in the 1855 shake, with small sand volcanoes common. The Rimutaka and Tararua ranges were slip-ridden and deep fissures appeared in places along the valley. North of Masterton, a hillside was broken in half, partly falling into the Ruamahanga River, creating a temporary dam. Behind the slip two lakes – one large, the other much smaller, formed – the ‘Hidden Lakes’ at Kopuaranga.

Fatalities were surprisingly few – in Wellington the hotel keeper Baron von Alzdorf was killed when a chimney fell on him, but in Wairarapa several Maori were killed when a whare collapsed.