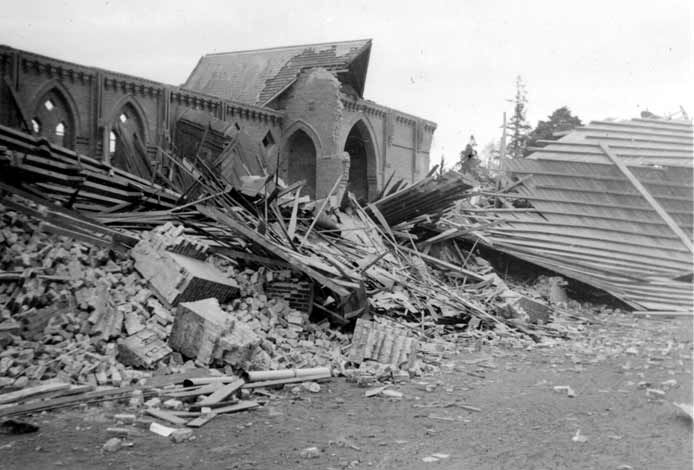 Masterton’s St Matthew’s Church was so damaged in the 1942 earthquake that Army engineers demolished it.

Earthquakes were the last thing on most people’s minds on 24 June 1942. The country was at war, and many households had their men in camps in New Zealand – soldiers were at Carterton, the Opaki racecourse and Solway Showgrounds.

The Wairarapa was shaken by a sharp earthquake at 8.17 p.m but much worse was to follow at 11.16 – the earth growled and rumbled and the sky was lit by flashes of light coming from high–tension wires. Inside, furniture was rolling around rooms, and bric-a-brac was being thrown from walls and mantelpieces to the floor.

Masterton was the worst affected town, much of the central business area being badly damaged in the shake. J.V. Gordon’s chemist’s shop, on the corner of Bannister and Queen Streets was severely damaged, debris littering the corner. The whole front of Miss Ninnes’ shop in Queen Street fell off, exposing not just the store below but also the living quarters above. The chapel attached to the side of St Matthews Church fell in, and many parapets and verandahs were damaged.

Soldiers from the camps were called out for guard duty and Queen Street was cordoned off. Borough Council employees checked through buildings to ensure that no-one was lying injured. The following morning they were out on the streets again, sweeping up the glass and rubble. Men were soon employed removing the portions of damaged buildings thought to be the most dangerous.

Eketahuna was badly affected, and the Borough Council Chambers were badly cracked. In Carterton, Wakelin’s Flour Mill was damaged, as was the Wairarapa A & P Society building in Memorial Square. W.H. Day’s shop in Greytown lost its facade, but the earthquake also damaged the town’s swimming baths, and Papawai marae’s large monument to Tamahau Mahupuku. The southern-most towns, Martinborough and Featherston, were not so badly affected, but Pain and Kershaw’s store in Martinborough was extensively damaged.

Some damage was consistent. Many residents lost ornaments and pictures in the shake, and most lost their preserves and jams as pantry floors became strewn with glass shards. Chimneys fell in staggering numbers – there were an estimated 4,700 chimneys down in Wairarapa. The cemeteries of the district were also devastated, each littered with fallen headstones and cracked monuments.

As the shocked population surveyed their damaged surroundings they were being rocked by aftershocks, over 200 shocks being recorded between the first and 7 a.m. the following morning. These shocks continued for months.

Army engineers were quickly called in to assist with the cleanup. They pulled down the worst of the damaged masonry, and started cleaning up the debris while the town centre was closed as the work went on. Bricklayers from all parts of New Zealand were called in to repair many chimneys.

Although people had been allowed into town on the Friday following the shake it was after the weekend before most of the shops were passed as safe to re-open.

On Tuesday the Army decided it was time to demolish the badly damaged St Matthew’s Church with explosives.. The explosion was heard all over town and buildings in the vicinity rocked with the force and some windows were blown in. People living near the church complained they sustained more damage in the demolition then they did in the earthquake.

There was a large aftershock on 2 August that toppled many rebuilt chimneys. They were repaired again just in time to be toppled by yet another major aftershock in mid-December.

The legacy of the earthquakes of 1942 is plain in the main street of Masterton. The earthquakes destroyed over 20 brick buildings, over 50 other buildings required alteration and strengthening. In most cases the ornamentation was removed for safety reasons.