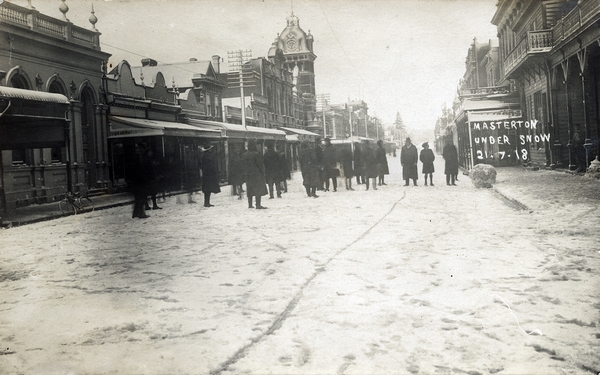 Queen Street, Masterton, in the 1918 snowstorm.

New Zealand was hit by a cold front from the Tasman Sea in July 1918. In Masterton, the first snow fell on the early morning of July 19 after a night of very violent westerly gales accompanied by heavy rain. By the early hours of the morning the wind had turned to the south and the later morning was passed with a mix of wintry rain showers, interspersed with snow flurries. A respectable amount of snow fell in town – enough for snowball fights – while the hill country close to town was covered in snow.

There was a respite on Saturday – a heavy frost was followed by a clear day and most of the snow melted away. But in the early hours of Sunday morning the bad weather had returned with a vengeance, a very strong southwesterly blowing in, carry¬ing heavy rain and hail. By afternoon there was 30 cm of snow in some parts of town, with outlying areas reporting much more.

The Mount Bruce mailman was unable to make his deliveries, reporting that there was up to 122cm of snow on parts of the road. Telephone lines were broken between Te Wharau and Gladstone; at Tauweru a tree fell across the lines, breaking communication from Masterton to Castlepoint and there were four telephone poles broken on the Featherston-Martinborough road.

Wairarapa citizens made the most of the recreational opportunities offered by the snowfall. The Wairarapa Daily Times reported : “all Masterton and his children were out snowballing”. It seems that impromptu armies were formed and war was declared and no one was above being attacked – policemen, soldiers, the town’s leading citizens – all were equally likely to find themselves under siege by a storm of snowballs. Perry, Queen and Chapel streets were taken over by snowballers and people trying to use those streets had to run the gauntlet of snowballs hurled by young and old alike. The fighting was reportedly carried out in the best of spirits, the paper reporting that the “utmost good feeling prevailed”.

The snowfall wasn’t confined to Masterton. Up to 15cm was reported from Carterton and Greytown, where snowballing and snowman-making were the order of the day. The soldiers at Featherston Military Camp changed their methods of warfare and reverted to using snowy artillery to attack each other for a couple of days. Those who were accommodated at the “canvas town” were obviously less enthusiastic about the snowfall, but joined in the snow fights nonetheless.

Masterton Park was covered in snow and the town’s photographers flocked to take views of the trees and shrubs gently drooping under the weight of the snow they were carrying, and of suitably clad Mastertonians deporting in the snow.

It wasn’t all fun and games though. C.E. Daniell’s sawmill in Lincoln Road was damaged – a suspension bridge across the Waipoua River was unable to cope with the weight of snow landing on it and it crashed into the river. Fortunately, a horseman who had been cautiously approaching the bridge, trying to decide whether or not to cross had decided he would not take the risk, saving himself and his horse an icy swim.

Later in the week it was reported there were still 6070ha of hill-country farm land under snow in the backblocks behind Martinborough, and that drifts up to 3m high had formed.