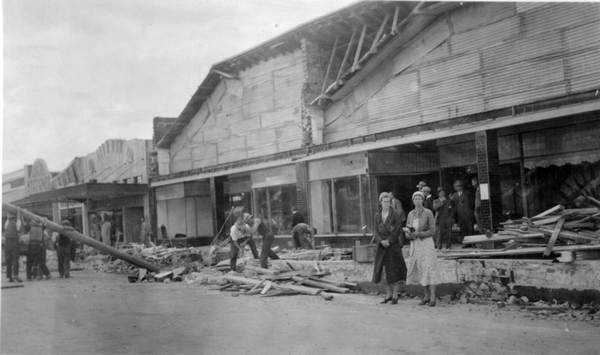 WFCA in Pahiatua, following the 1934 earthquake.

Wairarapa settlers were always alert to the dangers of earthquake. The country’s worst shake in historic times, in January 1855, had frightened the first generation of settlers, but things were not so bad for the next forty-nine years. Some small shakes were recorded in the region but it was not until 1904 that another moderately large earthquake occurred.

It was the 7.2 Cape Turnagain shake of 8 August. Felt over much of the North Island, it felled almost all the chimneys in Dannevirke, and smashed many in the Wairarapa too. In Masterton there was extensive damage to shops and many of the ornamental gables decorating the shop frontages in Queen Street and Hall Street (later Lincoln Road) were left dangling precariously.

Although there was moderate damage there was no loss of life – just some very scared residents. The Whakataki Hotel licensee telegrammed that no one was hurt at his establishment, but the chimneys had fallen in and all his liquor had been destroyed, while the Daily Times reported a Masterton woman was seen with her arms firmly around a fruit tree in her orchard, screaming for help.

George Goodall, from the Gladstone Hotel, was outside ploughing when the quake struck. He reported that the Ruamahanga River seemed to rise and fall, the bridge swayed and the tall cliffs to the south swayed before dropping thousands of tons of earth into the river. He also said: “Mud and water shot into the air from a hundred holes in the earth around – like miniature volcanoes. The horses screamed in an unnatural-like manner and Rangi, my companion, a Maori, equalled me in complexion.”

Tellingly, the recently constructed Masterton Post Office, a large heavily-ornamented brick building, was damaged, with cracks appearing in the bell tower. The local paper suggested it was time to remove some of the unwanted decoration on the imposing building, saying it served no useful purpose and was dangerous in an earthquake.

The prediction came true when the Post Office caused Masterton’s only recorded earthquake death on 12 April 1913. Another shake, not as strong as that of 1904, struck the town in the evening. There was general panic and most people rushed to get outside, including a number of customers at the Post Office. One of these, Te Hone Ngawhiro, from Hamua near Eketahuna, was struck by a ball-shaped ornament from one of the gables, and died in Queen Street shortly afterwards. Minor alterations were made to the Post Office.

The 1931 Napier earthquake, magnitude 7.8, was the country’s deadliest – the official number is uncertain but certainly over 250. It was felt widely through Wairarapa, and a number of buildings were strengthened, including the Masterton Post office.

The next significant Wairarapa-based shake was the magnitude 7.6 earthquake of March 5 1934. Centred near Pongaroa, the worst effects were felt in the eastern areas between Porangahau and Castlepoint. The townships of the Tararua and Wairarapa districts were also affected, with considerable damage in Eketahuna and Pahiatua, where there was one death attributed to shock.

In Pahiatua over 600 chimneys were felled and over 400 houses needed other work, and brick gables and parapets came tumbling into the main street. Fortunately for some, the newly-built five-storey Tui Brewery building, clad in brick but built of reinforced concrete, survived without damage. However, some buildings were damaged in Masterton, the old Opera House suffering along with the Post Office, both buildings being strengthened and altered.