Where did the 1918 influenza come from? 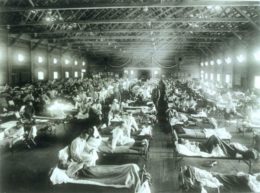 Immediately following the 1918 influenza pandemic many researchers speculated on the origin of the disease. As many influenza A strains were known to arise in the Orient it was first thought that the virulent 1918 form had also began in the east. Scientists thought the outbreak had begun in China and had been spread by Chinese and Vietnamese labourers entering both Europe and America . Others believed that it had its beginnings in an outbreak of a flu-like disease in a British Army camp in France during 1916. Some of this speculation was based on the theory that the influenza mutation occurred two to three years before the world-wide pandemic.

Modern researchers looking at the dispersal of the disease have come to a different conclusion. Many now believe that the mutation probably occurred only a few months before it rapidly spread across the world and that the mutation occurred in the United States.

It was once believed that the first severe outbreak of influenza in the United States was at Camp Funston, now Camp Riley , in Kansas . A cook at the base was thought to have been the source of the outbreak. It now seems likely that the disease was carried into the camp by soldiers from Haskell County , three hundred miles to the west.

An outbreak of a new and virulent influenza was reported by the local doctor in February 1918. The county newspaper, the Santa Fe Monitor, reported the epidemic, recording many people were ill with pneumonia and dying. The newspaper also reported that young men from the sparsely populated county were reporting to Camp Funston.

The first cases were recorded in the camp on March 4 and within three weeks over 1100 soldiers were hospitalised and thousands more were being treated at makeshift infirmaries.

Soldiers from Camp Funston were transferred to other camps and sent overseas, unwittingly spreading the disease. During the American spring of 1918, thirty of America ‘s fifty biggest cities reported an April spike in deaths from influenza, and in the French city of Brest , the arrival point of the largest numbers of American soldiers, the disease entered Europe .

It quickly spread across the Continent. Its quick proliferation was largely hidden from the public as it was not reported in the warring countries and it became known as ‘Spanish Flu’, as Spain was not participating in World War One and had no censorship. The Spanish, ironically, called it ‘French Flu’.

This first outbreak was of a milder nature than the strain that later spread around the world. The second strain seems to have originated simultaneously in France , the United States and Sierra Leone in August 1918. Many sufferers developed bronchial pneumonia or septicemic blood poisoning. Others developed cyanosis (blue-toned skin) through the low oxygen levels in their blood. This condition was often fatal, and led to another common name for the flu, ‘Black Plague.’

It was this second wave that caused the pandemic in New Zealand in late 1918.