The influenza pandemic peaks and passes 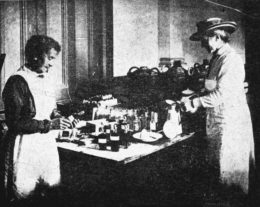 By mid-November Masterton was fully in the grip of the influenza pandemic. An extra inhalation chamber was erected in the Masterton Borough Council offices and thousands of people were reported to be using the facility. Most were undertaking the treatment once a day as recommended.

The temporary hospitals scattered throughout Masterton were staffed by volunteer nurses and men were called upon to work as drivers. A temporary dispensary was set up in the sample rooms alongside the Hospital Board offices in Dixon Street. The public was invited to purchase masks and gargles from the dispensary.

On the 15th November the newspaper reported that the ‘plague is at present at its worst’ but by the 21st things had peaked. The Wairarapa Daily Times reported that there were signs of abatement, although 700 people were said to be suffering from the flu. A medical student had been sent from the University of Otago but most of the ill were relying on help from their neighbours. Most stores (with the exception of bakers, grocers and butchers) were closed and schools were shut down for the rest of the year.

As the November turned to December, Wairarapa seemed past the worst of the pandemic, although there were still occasional fresh cases and deaths were still being reported. Maori seemed to be infected later in the cycle and their death rate increased through December.

By the middle of the month the temporary hospitals were closed down again and the number of patients fell to 30. At the end of the year it was reported that there had been no fresh cases for several days and no deaths for over a week.

F.P. Welch, who had volunteered to serve in the temporary hospitals, recorded the passing of the year thus:

Thus ends the old year, one of sad memories and heartbreaks in millions of homes throughout the world. May the New Year help to bring peace to those who have suffered and God’s blessing to all.