The influenza arrives in Masterton 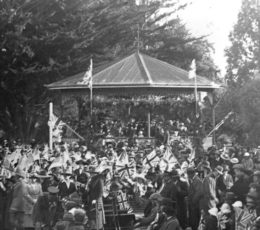 Influenza’s arrival in Masterton co-incided with celebrations to mark the end of World War One.

On 12th November 1918, Masterton went mad as the news of the official end to the war came through.

“Pandemonium reigned in Masterton. Whistles screeched out, bells rang, people cheered and screeched with joy, bands played as there was such a scene in Queen Street as has never before been recorded. While the bands played and people sang and cheered, beflagged motor cars sprang up like mushrooms- gaily decorated cars containing young and old, all out to do their part in the celebrations; and they did it.” Wairarapa Daily Times 13 November 1918

The crowds made their way down to the oval at Masterton Park where Deputy Mayor F.W. Temple , standing in for Mayor J. Coradine who was overseas, read the official announcement of the end of the war in a sombre tone. At the end of his announcement the crowd broke into wild cheering.

Masterton’s first influenza deaths were reported on November 13th – three people having succumbed, including the long-term Carterton resident John Hart, who had been living in Masterton for a short time. He was reported to have been in the best of health until a few days previously when he had been stuck by the influenza. Others to die that first day were the Mauriceville butcher G. Brown, and the “little girl named Jean Hall” from Featherston, who was being treated in Masterton Hospital.

On November 14th Masterton Borough Council organised to combat the approaching medical disaster. A public meeting was held in the Municipal Chambers and the town was divided into blocks with citizens appointed to look after each block. An inhalation chamber was set up in the Chambers and citizens were asked to take the inhalation treatment daily.