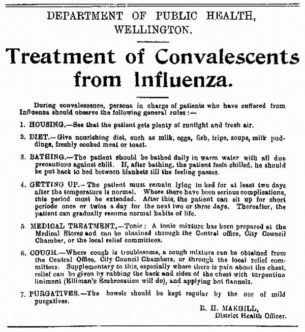 The Department of Health issued treatment guidelines for sufferers

There was little that medical services could offer to those who were suffering from the worst symptoms of influenza. Many deaths occurred from secondary infections, now easily treatable with anti-biotics, but then unheard of. Others were infected with severe viral pneumonia, for which we still have no cure.

The Masterton Hospital was soon swamped with patients needing nursing and temporary wards were opened in the Council Chambers, the Masterton Club, the Soldiers’ Club, the Technical School (now Hiona Club building), St Bride’s Convent and the YMCA. These needed many volunteers and many Masterton men and woman took up the call.

A Central Office was established in the Hospital Board’s Office in Dixon Street, open 24 hours a day to coordinate the response. Patients were asked to ring this office rather than their doctor, and were told that Doctor Helen Cowie, Nurse Gerrand and the Plunket Nurse would be on medical duty in the town. They were assisted by many volunteer nurses and drivers.

Among those who volunteered was F.P. Welch, whose diaries in the Wairarapa Archive detail his work through the next few weeks. Welch was a “chesty” person; his diaries, from 1889 to 1929, record many instances of his spending weeks in bed with chest infections, and the many poultices applied to his chest to move the infections.

The one staff member at his commercial agency was ill with influenza, but Welch decided he had to do his bit to help and spent much of the next two weeks working as a night orderly at some of the temporary hospitals.

He recorded his routine of working through the night, then starting to clean everything up for the hand-over to the day orderlies at 7.00 a.m. On his way home to Totara Street he would call in at the inhalation chamber, then once home, he would soak in a Kerol bath for further disinfecting. He would try and sleep until about 4.00 p.m., and then would return to the hospital. He recorded having to pump oxygen into the lungs of one critically ill patient for hours, only to have him die when he went off duty.

Many of the volunteer nurses were female. The Wairarapa Daily Times eulogised their efforts:

The work of the lady volunteers is beyond praise, the women of Masterton living right up to the highest traditions of the British race. They have no fear of infection and are not afraid to undertake work which they would never have dreamed of doing in circumstances other than those obtaining in the present time of distress.