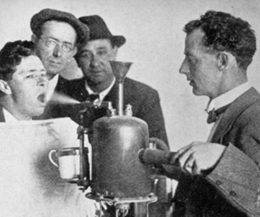 Citizens were advised to go to special inhalation chambers

The Health Department was quick of the mark with advice for those who felt they were getting the flu. They recommended that sufferers should:

The Masterton Borough Council initiated inhalation chambers in their offices. Citizens were urged to “immunise” themselves at least once a day. Formalin was the first chemical used but it was quickly realised that this irritated the membranes in the nose and throat. It would make the patient more prone to infection from the disease, so a switch was made to a less aggressive protectant, zinc sulphate.

The inhalation chambers offered no protection against the disease and by congregating people in confined spaces might actually have helped the spread of the disease.

The Wairarapa Daily Times suggested a simple method of providing fumigation for householders. It involved taking half a shovel of glowing embers from the fire (wood not coal) and sprinkling them with three or four teaspoons of Jeyes’ Fluid. The resulting steam was to be inhaled deeply, the process being repeated daily.

An urgent message was published that sheep dip should not be used for vaporising as it contained arsenic and could poison those seeking to protect themselves.

In order to cope with the public health aspects of the disease many businesses closed and the Government shut all schools until the beginning of the new school year in 1919. Maori, who were being badly hit by the pandemic, were instructed not to hold tangi, as these social occasions also spread the virus. Other regulations were brought in making it an offence for anyone with the virus to be in a public place.