How did the influenza get to New Zealand? 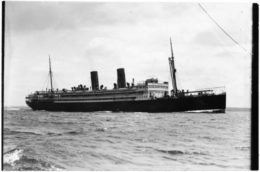 New Zealanders looking for someone to blame for the influenza pandemic of 1918 looked to their politicians. Many thought their country’s health services had let them down and that national politicians had not prevented the spread of the disease and had not advised people well enough about treating it. Many went further and blamed the arrival of the flu on their politicians – Prime Minister William Massey and his deputy Joseph Ward in particular.

The two men had been in Europe for a peace conference and were returning to New Zealand on the liner Niagara, having boarded the ship in Vancouver. It was only three days out to sea when a junior crew member came down with an illness, first diagnosed as dengue fever. The vessel continued on and by the time it arrived in Suva , Fiji there were eighty-three ill passengers and crew. The ship’s doctor realised what had happened and advised the Fijian authorities that the ship was carrying influenza. The ship was placed in quarantine and denied permission to berth.

The Niagara steamed on to Auckland , arriving on 12 November. The ship’s captain radioed that they had the Spanish Flu on board, saying that 100 crew members were down with the illness, and that 24 cases needed urgent hospitalisation. The local authorities didn’t have the power to quarantine the ship and wired Minister of Health George Russell for permission. He asked whether the infection was “merely influenza,” and on being informed that the sickness appeared to be influenza, he allowed the ship to berth and be cleared.

The arrival of the Niagara more or less coincided with the widespread dispersal of the disease and many New Zealanders blamed Russell, thinking he had been swayed by the prestigious passengers the ship carried.

In fact the more virulent strain of the pandemic was already in New Zealand, the six first deaths being recorded in Auckland three days before the Niagara docked. The main surge in cases occurred a fortnight after the ship berthed. In all, 29 Niagara passengers and crew were treated for influenza but doctors reported that their cases seemed no worse than normal. As the more virulent form of the disease was not known in Vancouver it seems likely that the Niagara sailors and passengers were infected with the less dangerous form.

The New Zealand pandemic appears to have spread from Auckland. It is almost certain that the second wave of the influenza arrived in the country with returning troops in the weeks before the arrival of the Niagara, as many troopships arrived from the United States during October and November 1918.