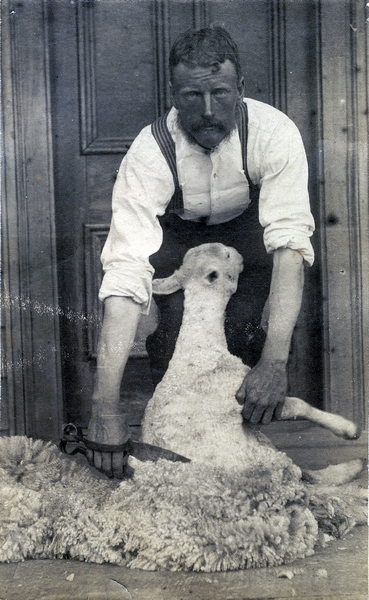 Alf Vile with hand shears in the 1880s

The early economy of the Wairarapa region was based firmly on large sheep stations. These farms, predominantly in the eastern hill country, relied solely on wool for income as frozen meat export was not possible until the invention of refrigerated ships in the early 1880s.

There were not many shearers at first and a great number of sheep to be shorn. All shearing was done by hand, using blade shears. Individual shearers in the late 1850s could expect to be paid “4/- per score” – 40 cents for each twenty sheep – and a good shearer would be able to shear fifty sheep in a day, using short snipping blows. In the 1860s shearers were being paid up to $4 per 100 sheep but as the economy went into decline, wages fell until the standard rate was $1.75 per 100.

At first sheep shearing was carried out in the open, or perhaps in an open sided shed, but as flocks grew and shearing became more organized, large shearing sheds were built on most medium to large sized sheep farms.

A big change came with the introduction of mechanised shearing plants in the late 1880s. The new “shearing machines” produced by Wolseley and Cooper and others, allowed shearers to develop longer strokes and made shearing quicker.

They were powered by diesel engines and shearing sheds became popular visitor attractions. During the early summer, coaches were taken to the near-by sheep stations, such as ‘Brancepeth’, for townspeople to get a glimpse of the shearers in action, and to have a picnic on the homestead lawn.

As well as shearers, other workers were required in the sheds to class and grade the wool, and to pack it into bales for sale. Wool is bulky in its natural state and needs to be compressed. One of the most famous of all wool presses was the Donald’s Wool Press, invented and manufactured in Masterton from the late 1880s.

With the improved technology, a good shearer was able to shear more than a hundred sheep in a day, but as the years passed and more thought was given to proper technique, the standard number of adult sheep a good shearer could shear grew to over 200. By the 1930s the very best had still not been able to achieve 300 sheep in a day.

At the forefront of those revolutionising the shearing industry was Godfrey Bowen. As a young man he looked at the various techniques employed in shearing and by combining points from many different shearers he and his brother Ivan developed the Bowen Technique. This was designed to shear as quickly and as efficiently as possible.

Bowen was employed by the New Zealand Wool Board and in conjunction with eight other instructors, travelled New Zealand and overseas, teaching his methods.

Shearers are naturally competitive. Some experts claim the first shearing competitions in New Zealand were the unofficial contests held in South Canterbury in the 1860s, while others say the first was in the Hawke’s Bay in 1902, but competition shearing as we know it today started with a national contest staged by the Wairarapa Young Farmers’ Club in Masterton in 1957.

The Golden Shears International Shearing Championship Society was formed in 1960 and Godfrey Bowen helped arrange the first competition the following year. It has been run every year since and is regarded as the most significant shearing competition in the world.

Today the records for shearing are 721 sheep in a nine hour day, held by Rod Sutton, and 866 lambs, held by Dion King.