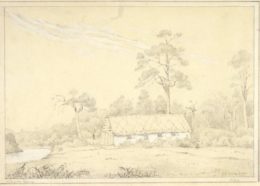 Wharekaka farm was the first established in Wairarapa

From the very first time Pakeha explorers saw the Wairarapa plains they were excited about the possibilities of agriculture in the region. They foresaw the time when the rich lands around Lake Wairarapa would be studded with sheep and cattle, and patchworked with grain crops.

Although Wairarapa Maori had extensive gardens, and were well versed in horticultural skills, they did not raise livestock. The first potential graziers were members of the New Zealand Company’s settlement of Wellington, who were disappointed by the lack of opportunities for extensive pastoralism in the confined spaces of the capital. They quickly journeyed around the Palliser Bay coastline to seek out pastures new on the flat land in Southern Wairarapa, William Deans the first to do so in October 1840. In the end he shifted further south and established a dynasty in the Christchurch area.

Others quickly followed him into the Wairarapa but it was not until 1844 that the first runs were established around the shores of Lake Wairarapa; Frederick Weld, Charles Clifford, William Vavasour and Henry Petre of ‘Wharekaka’ narrowly won the honour of having the first, beating out Charles Bidwill.

Things were difficult for the first farmers. It was problematic to get enough supplies around the coast, relations with their Maori landlords could be fractious at times and it was difficult to move produce to market. Mosquitos were also a constant irritant.

Even though the region would later become known for the quality of its sheep, it was cattle and horses that provided the economic basis of the first runs. One run, ‘Wharekaka’, grazed 85 percent of the Wairarapa’s sheep. There was even a station largely dedicated to dairy production, and the district’s first butter was exported to Wellington by sea.

The next part of Wairarapa to be settled was the easily-accessible coastal perimeter, with runs being carved out of the coastal areas of Palliser Bay, and around the corner at White Rock. Before long there were increasing numbers of stock being grazed in Wairarapa, and names that were to echo through Wairarapa farming for generations, were establishing themselves in Wairarapa – the Barton, Riddiford, Cameron, Vallance, Pharazyn, Bidwill, and Matthews families were all well under way by 1850.

All the first runs were founded on leasehold properties, and as such were in contravention of Government policy. From 1853, the Government bought large tracts of Wairarapa from the Maori owners, and the first generation of farmers was able to purchase freehold title from the crown and stabilise their future.

It also allowed a new type of farmer to gain a foothold in the Wairarapa.

Men of small means, who had come to New Zealand in the expectation of owning their own smallholdings, had been frustrated by the lack of suitable land in Wellington, and they too looked to the Wairarapa for a chance to purchase a small farm.

Under the leadership of Joseph Masters, the Small Farms Association was formed and after successfully lobbying the Government, they were able to move on to their 40-acre (16 hectare) farms around the villages of Masterton and Greytown.

Originally intended to provide a form of subsistence farming, with cropping, pig-raising and dairying expected to predominate, many of the small farms were joined into larger, more economic holdings.

The general pattern of Wairarapa farming was set though. In western areas, which tend to have higher fertility and greater rainfall, dairying became the major form of agriculture, while to the east, with generally poorer soils and more frequent droughts, sheep and cattle raising came to the fore.