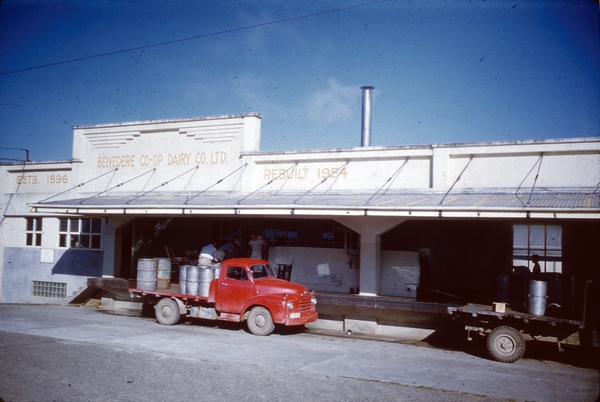 Dairy farmers brought their milk cans to the Belevedere Dairy Factory by truck in the 1960s.

Although Wairarapa has a reputation as a region of sheep farming, the dairying industry has had a large part to play in its agricultural story.

The first pakeha farmers were congregated on the lush pastures surrounding Lake Wairarapa, and although they were mainly raising beef cattle and sheep, there were stations that specialised in running dairy cattle, selling to their Maori neighbours and landlords, and even exporting butter to the Wellington market.

The small farmers who first came to the district in 1853, settling in Greytown and Masterton, were essentially dairy farmers too, their butter and cheese being also sent to the Wellington market.

The first of these was a co-operative, established following a meeting called by Greytown landowner and solicitor Coleman Phillips. It was only the fourth in the country when it opened in January 1883. Later that year the Taratahi factory opened, and the Dalefield factory, another co-operative, opened in 1887.

The first factories all made cheese. It was not until the Mauriceville Dairy Company opened its Mauriceville West factory that butter was produced on a large scale.

The dairy industry became very important for the small farmers in the recently settled forest lands of North Wairarapa and on the western side of the Wairarapa plains. There were factories established throughout the region, and also smaller collection depots called creameries. Farmers took their milk cans to these smaller facilities where the milk was run through separators, the cream being sent on to the factory while the skim milk was given back to the farmer to feed his calves and pigs.

In 1905 there were over 30,000 dairy cattle in the greater Wairarapa region – over 50% of those were in the Bush counties of Mauriceville, Eketahuna and Pahiatua – and an astonishing number of factories and creameries. In his Grassroots Business- A Record of Wairarapa Dairy Factories Henry Christensen lists over 100 entities, evenly divided between north and south Wairarapa.

Nationally, the number of factories peaked in the 1920s, and then more efficient transport and economies of scale led to increasing centralisation. Now there is only one dairy factory left in the region, Fonterra’s large plant at Mangamutu, near Pahiatua.

The dairy industry has come a long way from small family farms, delivering milk to a local factory or creamery by horse-drawn cart, and returning home with whey to feed pigs, to large farms with substantial herds supplying milk to a regional factory.