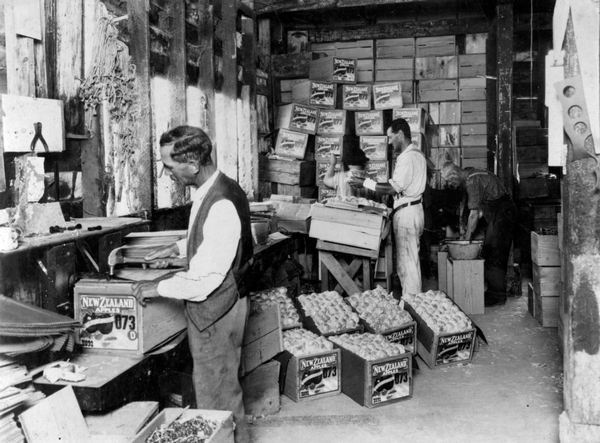 The rich alluvial plains around Greytown have traditionally supported a variety of horticultural endeavours, ranging from vegetable and cut flower production through the cultivation of small fruits such as black currants and gooseberries, to the wide-spread cultivation of apples and pears.

Among the leaders of the apple industry was James Hutton Kidd, an English-born orchardist who migrated to New Zealand with his family when a child. He and his brother Wilfred started growing apples and other fruit in a small block near Wanganui but in 1906 he shifted his operations to Greytown, buying a five acre block, but soon expanded this to 20 acres. He grew a large number of apples but also introduced berry-fruit growing to the Greytown district.

Hutton Kidd was very interesting in a scientific approach to orcharding, investigating new techniques for growing, and being particularly keen on breeding new varieties.

American apple breeders had concentrated on very attractive-looking varieties which were sweet but seemed to lack the complexity of flavour of the older established European varieties. Kidd started crossing American varieties such as ‘Jonathon’ and ‘Delicious’ with English cultivars, especially ‘Cox’s Orange Pippin’. It was a cross between the latter variety and ‘Delicious’ that led to his first major success – a variety he called ‘Telco’, but which was later renamed ‘Kidd’s Orange Red’. This was a popular New Zealand variety, and grown in other parts of the world.

But Kidd‘s major achievement in apple breeding turned out to be posthumous. He died in 1945, leaving behind a large number of seedlings to be evaluated. Many of them showed too much russetting (a skin colouring) to be of commercial value, but two of them were released and marketed as ‘Telstar’ and ‘Freyberg’.

But it was ‘D8’ that turned out to be the very best of Kidd’s apples. A cross between his variety ‘Kidd’s Orange Red’ and ‘Golden Delicious’, it was recognized as having commercial potential and taken to Nelson for further trial, where it was a success, being released to the apple-growing world as ‘Gala.’

It quickly became New Zealand’s most important variety, and its red sport, ‘Royal Gala’, has become the international standard for red apples.

James Hutton Kidd’s ‘Gala’ apple is also in the background of many important New Zealand varieties, including ‘Jazz’. In recognition of the part played by Hutton Kidd in the establishment of New Zealand’s apple industry, the New Zealand Fruitgrowers’ Federation instituted the Kidd Memorial Award Scheme in 1970 to encourage the search for improved genetic material from New Zealand orchards.